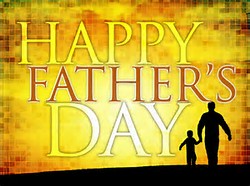 Who Should We Wish a “HAPPY FATHER’S DAY”To?

With 83% of families in this country being headed by single mothers who should get FATHER’S DAY well wishes and gifts?  Long gone are the days where the household consisted of one mother and one father and 2.5 children (how do you get .5 of a child)? In today’s complex society you have single mothers doing the jobs of both parents and to them that are holding it down for both parents I say,” HAPPY FATHER’S DAY”!!!  Being a single mother who has a nonexistent support system and no child support I know how frustrating life can be.  But, hold on every year you get older so do your child/children, and soon the struggle will hopefully be over.  I would not dare forget to acknowledge you when you and you alone do the job of two people.

To the single fathers that don’t have legal custody of your children, yet you spend time with them and go over and beyond what the courts have ordered you to pay, I wish you a HAPPY FATHER’S DAY!!To the father’s of children whom your DNA did not help to create I say, HAPPY FATHER’S DAY!!!

I want to especially thank you because you’re doing the job another man created yet didn’t feel the benefits were worth waiting for.  For example look at such people as basketball great Shaquille O’Neal and comedian D.L. Hughley whose biological fathers chose not to be a part of their lives until they had achieved fame and fortune.  There are more examples of deadbeat dads than I have time to write about in this column, but now that their DNA has 1produced a human being of wealth that they didn’t contribute to and all I can say to them is shame on you!

Now we get to the sensitive subject of gay and lesbian parents who have opted to take a child that would still be in the system hoping and praying for a family to adopt or foster them just so they can have a stable home.  I am not going to say it’s wrong or right for two mommies or two daddies to rear a child.  What I am going to say is as long as that child is removed from the system and is placed in a loving home where they can grow up to be productive human beings in society, to the parents I say:  “HAPPY FATHER’S DAY”!

To all the parents who like my stepfather took on the responsibility of raising three children that had none of his DNA, but was humble enough to give us the best life he could afford.  I say to him and all the men like him:  “HAPPY FATHER’S DAY”!

If you were fortunate enough to be reared in the home with the father whom you share the same DNA with please take the time to at least thank him for providing you his DNA.  I realize that all men that provide their DNA to help create a child are not fathers but merely sperm donors that mothers have chosen to stay with.  However, if this does not fit you and your upbringing by all means celebrate and wish that man a “HAPPY FATHER’S DAY”!!!

Now for my final point if you have been court ordered to pay child support and haven’t, please don’t expect anything on June 21, 2015.  If you haven’t spent time or spent any money on your child/children you should not expect any sort of kudos on Father’s Day.  This is a day set aside to recognize those who have provided, nurtured, and spent time with the child/children they helped to create, or chose to rear. For you the only thing I can say is there’s always next year.To everyone serving in the capacity of a father HAPPY FATHER’S DAY!