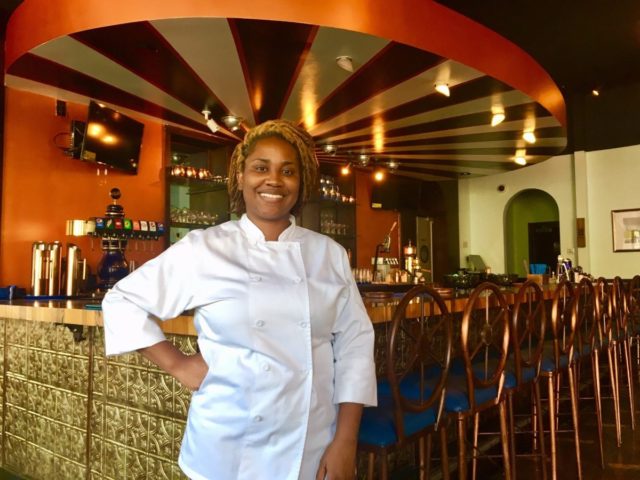 The wait is over.

Chef Andrea “Dre” Foster, owner of The Preservery Birmingham in Five Points South, will be opening her “elevated soul food restaurant with an international twist” on Sunday, July 21 beginning at 11 a.m.

A ribbon cutting is planned with the Five Points Alliance at the 2005 11th Avenue South location on Thursday, July 25.

Originally from California, Foster has lived in Birmingham since 2007.

“This is home,” she told Bham Now in a recent interview.

Before starting The Preservery, Foster had worked in the Army Reserves as a medical specialist, and for local bank in town as an underwriter.

After her father passed away from pancreatic cancer, she decided to leave her corporate job and start her journey toward opening up a restaurant.

Foster said, “Opening a restaurant was always something I wanted to do when I retired. I wanted to do it with my dad, but he ended up passing away. I decided, life is short – I need to do this now. Cooking has always been in my blood. My grandmother and dad were really good cooks, I shadowed them in the kitchen – so it has always been there.”

Creating a restaurant from scratch is not easy. Programs offered by Rev Birmingham, such as the Big Pitch and the REVeal Kitchen at the Pizitz Food Hall, and Create Birmingham’s Co.Starters program were instrumental in Foster’s development of The Preservery.

“Since we started working with Chef Dre in 2017, we have been looking forward to the day that she opened the doors of her own brick-and-mortar space,” said David Fleming, President and CEO of Rev Birmingham. “From the Big Pitch to REVeal Kitchen, Dre proved over and over that she had what it takes – and our whole team is delighted to see her realize her dream for The Preservery.”

And in just a few days that dream will come true.

So, what can patrons expect at The Preservery? According to Foster, the name best describes the place and its food.

“The name preservery is a combination of two words. My grandmother taught me how to make preserves, which is on the menu, and the preservation of soul food heritage. I’ve realized that all cultures have their version of soul food. You’ll see that in our artwork (around the restaurant) all different cultures handling food. That’s why our menu, even though it is soul food, has an international fusion. That’s where the name comes from.”

Along with meals that include The Preservery’s already famous fried chicken, shrimp and grits and banana pudding, the interior of the 5 Points South restaurant is warm and inviting.

Even though it is not specifically a seafood restaurant, in honor of Foster’s father who served in the Navy, the interior features nautical embellishments: anchors feature prominently in the decor, barstools have ships’ wheels and upholstered chairs and banquette are deep rich navy blue in honor of Chef Dre Foster’s father service in the Navy.

There are also beautiful watercolors paintings of Birmingham cityscapes , a gift from Bob Moody, owner of the building Preservery will be occupying.

More than a restaurant, in the memory of her father, Foster wants to unite the community through her meals.

“I want to welcome everyone, especially the folks who have followed us for our entire journey, from the small private dinners to the festivals to Pizitz – to The Preservery at Five Points South. I want this place to unite people. I think food is the great equalizer. We all let our guard down. Over a common plate of food, we realize we are not so different at all. That’s what I want everyone to see and feel while their here. That we are all family.”