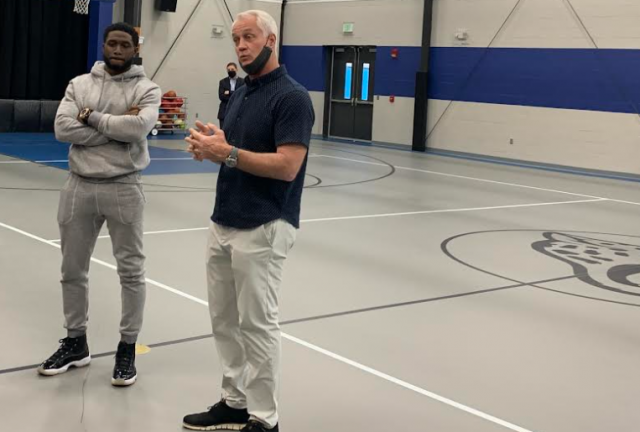 Former NFL players Reggie Bush and Daryl “Moose” Johnston were in Birmingham Monday to announce the United States Football League’s (USFL) community partnership with the A.G. Gaston Boys and Girls Club and speak to some of the excited children at the club.

The USFL is expected to announce officially on Tuesday its inaugural season will begin April 16 in Birmingham with all eight teams in the city the length of the 12-week season.

Bush, who in his 11-year NFL career, won Super Bowl XLIV in 2010 with the New Orleans Saints and played with four other teams and Johnston, and the former Dallas Cowboy’s fullback, were together at the A.G. Gaston Boys and Girls Club in Birmingham’s Five Points West community and encouraged children to follow their dreams.

Bush asked a boy who said he wanted to be an NFL quarterback if achieving that would be hard or easy. The boy said it would be easy, and Bush latched onto that answer. Calling a task hard, Bush said, makes the task harder. If someone approaches a task and thinks it’s going to be easy, Bush said the task will be easier.

“Your mindset toward that thing is always gonna feel like, ‘I can do this,’” Bush said.

Johnston and Bush are also part of the USFL. Johnston, who serves as the executive vice president of football operations for the league, said the partnership is important for the league.

“This will not be the last time you see us. I promise that…,” Johnston said. “We can teach some skills in the game of football and teach how to play flag.”

Eric Shanks, CEO of Fox Sports, grew up going to his Boys and Girls Club and serves on the national board, Johnston said.

In addition to visiting with the cheering children, the pair also toured the club’s facilities with Devin Posey, CEO of the A.G. Gaston Boys and Girls Club.