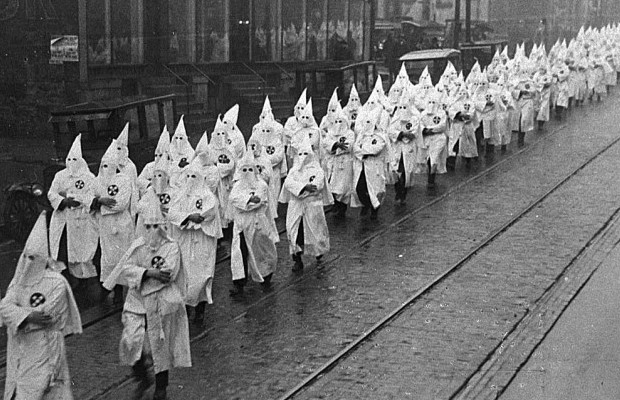 (HAMPTON BAYS) All along the bucolic back roads of this blue-collar gateway to the more opulent Hamptons, residents agree: There is nothing sophisticated about the Ku Klux Klan’s continuing drive to recruit new members.

The pamphlets the group has distributed seem to have been made in somebody’s basement, printed on threadbare paper with a printer in need of ink. They are stuffed into plastic sandwich bags, along with a few Jolly Rancher  candies serving as weights, and tossed onto driveways in the dead of night. Among the recipients have been Latino immigrants — the very target of the Klan’s campaign. “They didn’t have enough forethought to think about where they should really put it, and where they shouldn’t,” said Karen Fritsch, 56, whose husband discovered a packet from the Loyal White Knights of the Ku Klux Klan around the same day their neighbors, Colombian immigrants, got one. “If you’re an organized group that has an intention, why would you just throw it anywhere?”

The leafleting, from late July to late August, has been limited to two or three streets and though several residents found pamphlets, only four complained to the authorities.

Besides a recruitment form and a crude drawing, there was a pamphlet: “A introduction to The Platform and Principles,” of the group. It included supporting “a national law against the practice of homosexuality,” putting United States troops on “our border to STOP the flood of illegal aliens,” and promoting “our unique European (White) culture.” Since it is considered constitutionally protected free speech, the Southampton Town police say, there is no criminality. Given the K.K.K.’s history as a hate group, law enforcement and elected officials, clergy, immigrant advocates and neighbors are concerned, in part because memories of Long Island’s history of racial discord are never far from the surface.

Two decades ago, Hampton Bays was the scene of a leafleting effort during a time of widespread bias crimes across Long Island that led to the formation of a local anti-bias task force.

And as vast numbers of immigrants from Mexico and Central America, eager to fill menial jobs in the region’s agricultural or service industries, have transformed the demographics, the influx has sometimes provoked ugly episodes.

In September 2000, two Mexican day laborers were lured to an abandoned building by two white men, stabbed and beaten with tools in what prosecutors said was a racially motivated attack. A white teenager was convicted of killing a Hispanic immigrant, Marcelo Lucero, in a 2008 attack at a train station that became emblematic of similar crimes against Latino newcomers.

This summer, as the leaflets fell on properties in Hampton Bays, many here raised the same question: Why now? Representative Timothy H. Bishop, a Democrat who represents much of Suffolk County on Long Island, noted that hundreds of unaccompanied children, detained at the border with Mexico, have been sent to Suffolk County. “I am not linking the two,” Mr. Bishop said. “I am saying that is the only new thing I can cite, in this area of immigration, that might generate Ku Klux Klan activity.”

In fact, Robert J. Jones, who called himself the grand dragon of the Loyal White Knights, which is based in North Carolina, said in an interview that his organization was behind the Hampton Bays campaign and that it was motivated by the surge of immigrants entering the country. “A lot of Americans are fed up with immigration right now,” he said. “This immigration problem, immigrants coming into America, is destroying this place.”

Similar efforts are underway around the country, Mr. Jones said. In

Hampton Bays, Mr. Jones said, the work is being done by a 32-year-old “active exalted Cyclops,” a man he declined to identify but who, he said, lives in town, where he runs a klavern, or local chapter, that is one of three in New York State. Several people, Mr. Jones said, had sent applications to an address, in Pelham, N.C., that is listed on the leaflets or had called a hotline listed on them.

“I have never seen the Klan expanding the way it is now,” he said.

Despite whatever success Mr. Jones might claim, the K.K.K. today is a feeble group, according to those who track hate groups. Klan enrollment nationwide stands at about 5,000 over more than a dozen groups, said Mark Potok, a senior fellow at the Southern Poverty Law Center. By comparison, the Klan had about four million members in the mid-1920s, when it was unified.

The Loyal White Knights, which was formed in 2012, is the largest Klan group in the country, Mr. Potok said, but the various groups are often squabbling and competing for members. He says the groups are using the immigration debate to gain attention.

“It’s almost as if they’re getting the message from the narrative that’s out there,” Mr. Potok said. “It’s opportunistic.”

Sister Mary Beth Moore, who runs Centro Corazon de Maria, a nonprofit advocacy group based in Hampton Bays, called the leafleting “a nasty thing,” and  “distressing,” and yet another problem confronting local immigrants. Many immigrants live in poverty, occupy “the most modest housing stock” and fill the public schools with children who struggle to speak or read English, she said. As their ranks have steadily increased in this hamlet of 13,000, the friction between foreign-born and longtime residents — mostly middle-class Long Islanders and retirees on fixed incomes — has become palpable.

“They are not accepted,” Sister Moore said. “There’s a tension, particularly in Hampton Bays, because it is the poorest of the Hamptons, and people here live modest lives. They feel put upon, because we have the largest population of Latinos.”

Anna Throne-Holst, the town supervisor of Southampton, said the leafleting was not “at all reflective of the community we live in.” But it cannot be brushed off, she added, and town leaders are considering holding a rally. “It’s certainly offensive,” she said. That is how Andrea Londono, 17, took it. Her hands trembled as she stood outside her home on Thursday, holding the papers her father had found there days earlier.

Her father, Carlos, 58, came to the United States from Colombia in 1984, worked as dishwasher, then had construction jobs and bought the family’s neat stucco home here eight years ago. He is proud that Andrea is finishing high school with plans to study astrophysics in college. The ink on the pamphlet was smudged, and the words faint. But Andrea clearly made out the crude sketch of three men, a Jew, an African-American and a Latino, above the words: “We want your jobs — We want your homes — We  want your country.”

“That’s mean,” Ms. Londono said, standing alongside her sister Carina, 10, and their father in their driveway on Columbine Avenue. “It’s really stereotyping,” Andrea said, “and not at all like anyone I know.”