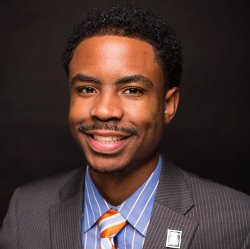 Vincent Harris is a Birmingham native and a 2006 graduate of Auburn University.  He is currently a doctoral candidate serving as the graduate coordinator for the Black Male Leadership Initiative at Louisiana State University.

Teach the Past, invest in the Future
Imagine a house on the corner of an inner city neighborhood in Birmingham, Alabama. From inside you can hear the blasting sounds of police sirens echo through the walls and see the reflection of red and blue lights in the window as patrol cars speed down 6th Ave. South. And just steps away from the front door, sidewalks run perpendicular to drug–infested alleys where young Black kids walk alongside street corners passing illegal activities that could unfortunately lead to prison or death.
This image was more than a vivid mental picture for me.  It was my reality. I am from the birthplace of the Civil Rights Movement; a city with neighborhoods tainted with racial disparity. But, I refused to allow my environment or society to chart my path in life. Birmingham’s recent and influential growth is a testament to the lessons of overcoming adversity. Birmingham has taught me to be persistent and show integrity. It was this historic city’s broken past that motivated me to succeed and inspire kids facing similar obstacles to overcome existing systemic barriers.
During the past few weeks, students in Alabama have been celebrating and recognizing Black History Month in a variety of ways.  Some have read a book by a Black author, written a research paper on an influential Black inventor, or watched a cinematic depiction of Black history in their classrooms. But, when I became a teacher in 2007, I knew I had an obligation to go a step further and share my city with my students.
In my classroom hung a poster that read, “Courage:  Mental or moral strength to venture, persevere, and withstand danger, fear and difficulty.” Above these words was a vivid photo of three young Black kids in 1963 relentlessly trying to shield their bodies from the surge of powerful water hoses as they protested in Kelly Ingram Park for the right to an equal education for all students in Birmingham, Ala.
I would often point to the poster and remind my students to never take for granted the opportunities they are afforded. This often led to discussions about inequity and how the past can impact the future. But, on one particular day, a student stared at me with a perplexed look and said, “So! Mr. Harris why should I care? I wasn’t there.”  I immediately mustered up a sense of calm and patience and responded, “What matters is that they were there, and because of them, we are able to stand here today and learn, teach, and grow together.” It was in that moment that I realized my generation has a responsibility to work to ensure that every kid is moving through a system that affirms their identities, shows them they’re valued, and allows them access to the knowledge and opportunities they have been denied for far too long.
It wasn’t until I opened my students’ eyes to the impact of Birmingham’s history, Black history, and our country’s history that they began to recognize the struggles of the past in their present – the disparities that exist in our country’s education system, the injustices they hear about on the news and witness in their own communities, or the statistics that say they won’t succeed because of the color of their skin. These lessons won’t be forgotten.
While the “whites only” signs of the ’60s have come down, the reality of separate and unequal endures. I joined Teach For America because I wanted to have a hand in shaping our future leaders.  I wanted more students to look at the front of the classroom and see an example of what’s possible for their lives.
With the same courage and dedication it has taken my city of Birmingham, Ala. to rise above its tainted past, it will take the hard, dedicated work of countless leaders and change-makers to fix the systemic inequality many groups experience. We must work toward these long-term changes, as well as the immediate opportunities before us, to ensure that every student gets a quality education and shares their gifts with others.
Choose to teach and you can help invest in the future. Whether you decide to enter the profession through traditional pathways or alternative ones like Teach For America, we all can remind our kids that their thoughts, ideas, identities and opinions are meaningful and have a purpose. We can show them their worth by nurturing a sense of courage that will inspire them to ultimately do the same for others.