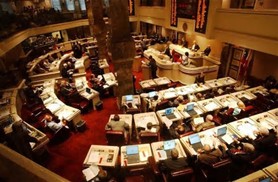 Every organization needs leaders. An Army needs a general. A team needs a coach. A company needs a president or CEO.

The Alabama House of Representatives also needs leadership, especially when we are facing a crisis like the one we are facing now. But over the last few weeks, it has become obvious that the wheels are coming off the bus in the state legislature, and no one really knows who’s leading anymore.

The one thing everyone agrees on is that Alabama is facing a budget crisis. But there hasn’t been much agreement beyond that.

I have to commend Gov. Bentley for stepping forward and starting the legislative session with a plan to address the problem. Do I agree with everything in the governor’s plan? No. But I have a great deal of respect for him because he has the courage to lead and offer his plan knowing that there would be political backlash.

In fact, the proposed General Fund budget is the perfect example of how our leadership in the House has fallen apart.

The House Republican tax package was so bad the leadership couldn’t even convince a majority of House Republicans to support it. And I don’t blame them. Anyone who voted for those tax increases may as well go ahead and announce their retirement from elected office because I doubt they will get elected again.

So now the leadership is trying to force through this budget that has these cuts that will devastate Alabama.

Is it the arrogance of wanting to prove a point to Republican legislators who wouldn’t support their tax package by making them vote on a budget that may as well be a death certificate for some people in Alabama?

Or maybe it’s extreme egotism that wants to veto the governor in an attempt to display power?

Whatever the real reason, the fact that legislators are about to vote on this budget without any solutions to the crisis shows that the leadership in the state House of Representatives is no longer able to lead it’s own Party, let alone the state.

The House leadership would apparently rather take it’s political frustrations out on the taxpayers than work with the governor and Senate leadership to develop a plan that solves the crisis and protects the taxpayers.

These budget cuts will cause people to lose their healthcare; thousands of elderly people will lose access to healthy meals because of the cuts to Meals on Wheels; mothers across the state will be impacted when DHR can’t process child support payments anymore; state law enforcement will essentially exist in name only; and these examples are only scratching the surface of what our state will face if this budget becomes law.

I can’t speak for anyone else, but I know that I will not vote for this budget. You’d be crazy to vote for it! The fact that legislators have to vote on it at all is proof that the House leadership is no longer able to lead. And that begs the question, who’s really leading the Alabama House of Representatives? Or maybe the better question is: who is ready to step up and lead?