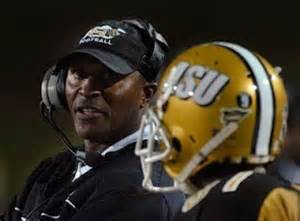 MONTGOMERY, Ala. – Thousands of fans swarmed to the ASU Stadium Saturday afternoon to watch the Hornets football team engage in a black versus gold scrimmage on the second—and final day—of the Alabama State University athletics fall fan fest.

At the conclusion of the scrimmage, fans of Hornet Nation had the opportunity to interact with all the fall sports teams with a meet—and greet— session where players signed autographs with silver and black sharpies on newly released 2015 schedule posters.

On the field, it was the first extended look at the team from a larger sized audience.

Head coach Brian Jenkins pointed to some of the positives he saw from the team.

“I thought the effort was good by our guys,” Jenkins said.  “We still don’t have the whole scheme down yet, but as far as their effort and attitude—I feel good about it.  And, that’s 50 percent of it.  We, as coaches, just have to find a method to get them to understand our scheme in full.  We’ll go back and watch the film and see what we need to do better.”

Among some highlights included:

Redshirt senior quarterback Daniel Duhart led a couple of successful drives for the offense with a pair of touchdowns.

On two of the series, he kept the chains moving with solid consistency.

Duhart connected deep with sophomore wide receiver Joshua Davis for a long gain to set up kicker Trevor Vincent, who made good on a 28-yard field goal.

Vincent, a redshirt sophomore transfer from LSU, was also 2-of-2 on extra point attempts.

“He [Duhart] did some things,” Jenkins said. “He made a good, deep throw and a couple other throws.  He pulled the ball and ran once or twice when I thought he should have thrown the ball.  But, he did some decent work.”

Alex Anderson of Miami Gardens, Fla., capped a drive by plunging into the end zone for a 1-yard touchdown run to put Team Gold on the board first.

Kenneth Thomas, a native of Fort Mitchell, Ala., added a rushing touchdown.

On a drive with Ellis Richardson under center, freshman running back Robert Pritchett busted loose for the longest rushing play of the day on nice gain of over 20 yards.

On defense, Rickey Haley was in strong pursuit of a fumbled ball that kicked outside the back of the end zone for a safety.