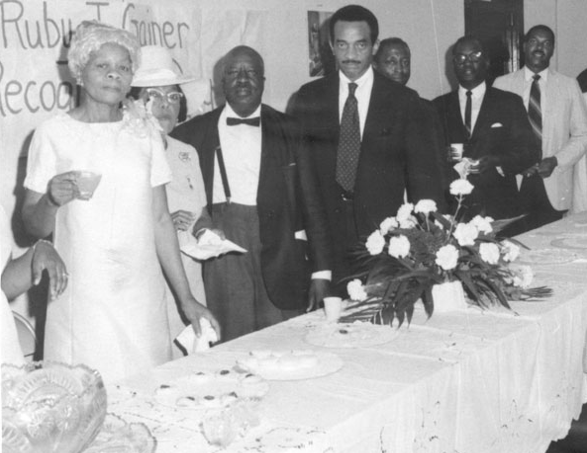 By all accounts, Ruby Jackson Gainer was one of those teachers that students remember for a lifetime. On a Facebook post dedicated to the junior-high and high-school educator, who passed away in 1994, former students recall how she taught English and civics in an “elegant” and “perfect” voice.

She used that voice to great effect beyond the classroom as well. Beginning in the 1940s, Gainer fought the Jefferson County school system for equal pay—and equal tenure credit—for African-American teachers. She endured years of legal battles in local, state, and federal courts, eventually winning her case but losing her job; Jefferson County fired her after 14 years of service. Gainer had to fight once more, all the way to the Alabama Supreme Court, to regain her role in the classroom.

This bold stand by Gainer—and the teachers union that supported her—was an important moment for civil rights in Birmingham years before the marches that riveted the nation. And her story is emblematic of the role that educators played in the struggle for racial equality in the city, says Tondra Loder-Jackson, Ph.D., an associate professor in the UAB School of Education Department of Human Studies.

In her new book, Schoolhouse Activists: African American Educators and the Long Birmingham Civil Rights Movement (2015: SUNY Press), Loder-Jackson aims the spotlight at a group of people not commonly considered heroes and heroines in the fight. “Frankly, the perspective of some of our historians and local foot soldiers is that educators were not involved in the civil rights movement in a significant way,” Loder-Jackson says.

More than a decade of research in local archives and numerous interview sessions with former African-American educators revealed the truth. Sometimes they served on the front lines, as in the case of Lucinda Robey, a teacher and principal who was an NAACP member and founding member of the Alabama Christian Movement for Human Rights, which spearheaded the 1963 Birmingham protests. More often—but just as important—they worked behind the scenes to seed the movement’s success.

Their activism took several forms, Loder-Jackson says. “They encouraged students to leave the classroom and protest, and then kept them from getting suspended or expelled,” she explains. “Some educators I interviewed said they were on the sidelines of protests at Kelly Ingram Park, providing transportation and protection for students who were participating.” Educators also stood up for colleagues who were fired for taking part in marches. “They raised money so that the fired educators’ families could eat and pay their house note,” she says.

Teachers also got clever in the classroom, using it as a laboratory to help students understand why the protests were happening. One teacher told Loder-Jackson how, during one assignment, she separated her students in a way that mirrored Jim Crow laws. In an oral history, another teacher described her lessons on voting, which featured a copy of the voter-registration test she was required to take. She encouraged students to take the test home so that their parents could study it and get registered themselves.

Professional organizations such as the black Alabama State Teachers Association served as the “linchpin” for involvement in the movement, Loder-Jackson says. “They were not set up to organize civil rights participation originally, but that is exactly what they became engaged in,” she explains. At meetings, teachers would talk about curriculum and other educational matters, but also slip in some off-agenda discussion on voting rights and registration tactics. The groups also formed legal defense funds to support teachers’ grievances against school boards.

The NAACP helped organize teachers as well, enlisting them to fight against the “separate but equal” underpinnings of segregation in the days before the United States Supreme Court’s Brown v. the Board of Education of Topeka decision, which declared segregated public schools to be unconstitutional. Ruby Jackson Gainer’s salary equalization case was among these, Loder-Jackson says. The goal was to challenge school districts on the “equal” aspects first, and then “wear them down and get them to focus on the ‘separate’ part,” she says.

The educators who helped power the quest for civil rights in Birmingham were not the first to challenge the racial state of affairs. In the century before the city’s key civil rights battles, education itself was activism. “Advocating for black education and establishing a school were viewed as threatening by many Southern whites,” Loder-Jackson says.

In her book, Loder-Jackson describes how African-American civic clubs and churches often took the lead, supporting private institutions such as Birmingham’s Tuggle Institute. Founded by Carrie Tuggle, a former slave and social worker, the institute both educated and housed poor black children; the curriculum covered academics, industrial training, nursing, music, character education, racial pride, and self-esteem development. Even though the white philanthropic community also supported the school, it did not escape racist retribution; it was destroyed in a suspicious fire like other black schools at the time. (Afterward, the black and white communities came together to rebuild the school, which continues today as the Tuggle Elementary School in the Birmingham city system.)

At the same time, the African-American community, including educators, led the push to establish public schools for black children. Birmingham opened the first school for white children in 1874, three years after the city’s founding, but it wasn’t until 1883 that black children could attend their own publicly sponsored school. And even then, the school board insisted that the black community pay for the facility’s construction and other resources necessary for teaching. Loder-Jackson also credits Alabama’s “black Reconstructionist legislators who fought for state-funded education for blacks” for encouraging the growth of public schools. “That was risky to do in that time,” she says.

In the wake of civil rights victories of the 1950s and 1960s, it was left up to educators, in many cases, to implement school integration. The Supreme Court had mandated desegregation “with all deliberate speed”; in her book, Loder-Jackson includes stories and recollections from educators “who, in their day-to-day professional lives, figured out how to make the promise of Brown materialize,” she explains. One of them, a principal who had been appointed to a school in a rural area, worked with his staff to ensure that the cheerleading team and other clubs included both white and black students. Other teachers talked about taking a stand to ensure that their newly integrated schools did not lower academic standards or create a separate curriculum for black students.

Teachers also had to work to erase racial misconceptions among their new colleagues. A group of teachers who had worked at Birmingham’s West End High School described to Loder-Jackson how principals initially assigned them basic courses, presuming that they didn’t have the competency to teach advanced courses. “They had to prove themselves” over and over again, Loder-Jackson says. Eventually, “some of those same white principals did promote them or give them advanced courses.”

Loder-Jackson, who was an educator in Chicago schools earlier in her career, finds the stories of Jackson and the other activists humbling. “I know I’m a beneficiary of their great sacrifices,” she says. But what about her UAB education students? What is their reaction?

“It’s difficult for them to comprehend what actually occurred and that it was the status quo,” says Loder-Jackson, who teaches undergraduate and graduate courses on social movements, policy, and politics in education. “They start asking themselves, ‘What is my generation’s civil or human rights issue? What should I be fighting for in this day and time?’ It causes them to reflect and consider whether they have become complacent because so many people before them have fought battles they no longer have to fight.”

Loder-Jackson hopes her book inspires that same reflection and motivation among educators already in the classroom and activists in the community. “Teachers have always had quite a bit of agency, if they choose to exercise it, to make change in society,” she says. “First and foremost, they have fought for students, making sure they had the schools and resources they needed. This history reminds teachers that education is a continuous struggle for equality.”