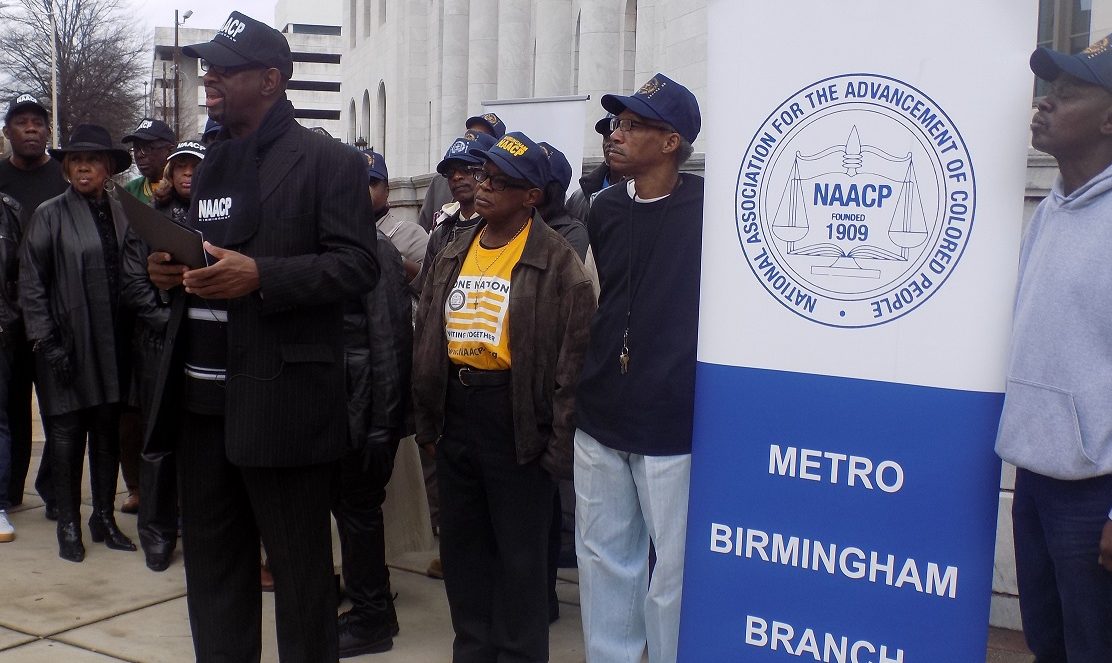 Civil and voting rights advances would “evaporate” if Alabama Sen. Jeff Sessions is confirmed as U.S. Attorney General, said officials with the Metro Birmingham chapter of the NAACP on Tuesday.

“I think a lot of the civil rights protections and equal protections under the law, all of the dialogue that we’ve had that has come about since [the creation of] groups like Black Lives Matter—talking about de-escalation in law enforcement, cultural sensitivity—I think all of those things will evaporate,” said Hezekiah Jackson IV, president of the Metro Birmingham National Association for the Advancement of Colored People.

Jackson and other members of organization stood outside the U.S. Federal Courthouse in downtown Birmingham in solidarity with Cornell William Brooks, NAACP National President/CEO and Bernard Simelton, president of the Alabama State Conference of the NAACP who simultaneously expressed their “lack of support” for Sessions.

Brooks said on Twitter and that he Simelton would occupy the Mobile office of Sessions until Sessions withdraws as nominee or until the civil rights leaders are arrested.

Jackson said the civil rights organization chose not to remain silent on Sessions’ appointment as U.S. Attorney General, which he called a “critical matter.”

“Our main concern is centered around the reality of voter suppression. We have no evidence of [Sessions’] ability past or present to be impartial and unbiased as the Chief Enforcement Law Officer of these United States of America, especially in the areas of civil rights, voting rights and equal protection under the law,” said the local NAACP chief.

The long-term effects of Sessions’ tenure could be “regressive,” Jackson said.

The Metro Birmingham NAACP is calling on President-elect Donald Trump and the Senate “to replace Sessions with a nominee with a record of inclusion and commitment to protecting the civil rights of the American majority,” Jackson said.

In a press release officials with the NAACP asked, “How can our communities who have borne both the historical and current brunt of the attacks on the right to vote, sit idly by while an enemy to the vote is now given the responsibility of enforcing tis right? The simple answer is that we can’t.”

The group cites Sessions’ 2006 comments about the 1965 Voting Rights Act, which he called “a piece of intrusive legislation”; his support for voter photo ID laws, which some believe contribute to voter suppression and his historical record on civil rights and voting rights as proof of his inability to serve as Attorney General.

The organization also pointed to Sessions’ support of challenging the Voting Rights Act, despite his support of its extension in 2006, and his four votes against federal hate crime legislation between 2000 and 2009.

Sessions has received an “F” grade from the NAACP federal legislative civil rights report card since 1997. Also, during his failed 1986 confirmation hearing for federal judgeship, Sessions called the NAACP and the American Civil Liberties Union (ACLU) “un-American” and “Communist inspired” because they “forced civil rights down the throats of people.”