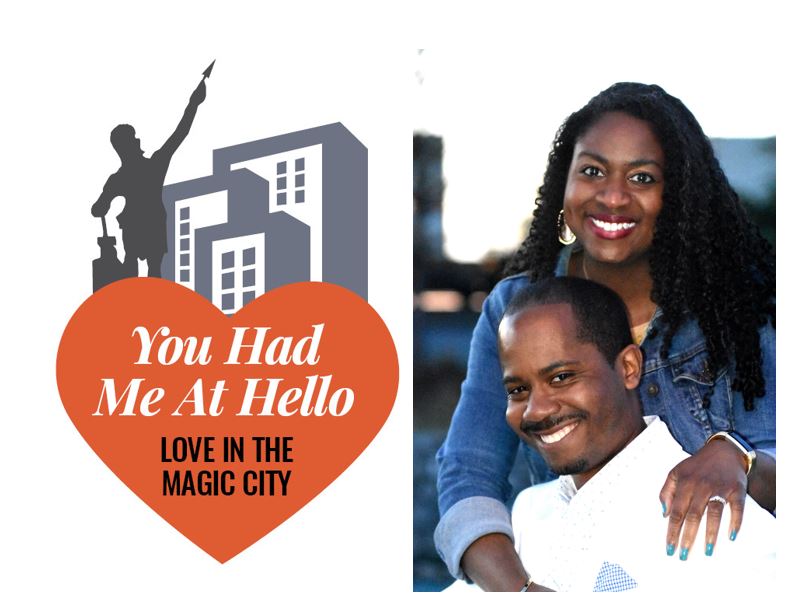 Met: While working at the ‘Courier-Journal’, a Louisville, Kentucky newspaper in the summer of 2002, Javacia was a reporting intern and Edward was a copy editor, a job he landed after being hired out of his internship the previous summer. Edward said the first sight of Javacia was exciting for a few reasons, “most of my coworkers were way older than me – many worked in that very building years before I was born. So I was looking forward to having some new faces in the newsroom that were my age.”

Edward asked one of his interns, who also happened to be Javacia’s roommate, ‘hey, who is that girl with all the hair?’” The two were formally introduced, but Javacia’s first impression of Edward wasn’t quite as optimistic. She confessed, “when I first met him I thought he was uptight,” she said with a laugh. “He always wore a tie and carried a briefcase which no one else in the newsroom did.”

But after the pair started spending more together, Javacia and her roommates realized she was completely wrong about him. “He was, and still is the funniest, wittiest person I know,” she said. “No one makes me laugh like he does.”

Edward recalled the turning point for him. “I had gone home to Virginia for a few days and I remember being on the plane flying back to Louisville thinking about her,” he said. “We’d only known each other for a few weeks but she was constantly on my mind. So I invited her to dinner – just us, no mutual friends or roommates. I guess that was our first ‘official’ date.”

“We made a deal that if our relationship could survive us being nearly 3,000 miles apart for two years after I got my  [master’s degree at UC Berkeley] I’d come back to Louisville and we’d get married. And that’s what we did,” Javacia said.

Taking his cue from male 90’s R&B music videos, Edward decided to propose amongst a sea of candlelight he created of his bedroom floor. He tells of the chore that it was sneaking an array of floral arrangements into the house and setting everything up without waking Javacia, but said: “it was so worth it.”

The Wedding: “The week before the wedding was one of the more challenging of our lives… I had a family member very unexpectedly pass away, which meant half my relatives had to miss the wedding to stay behind to deal with arrangements.” Edward said they had to “rearrange the wedding on the fly.”

“There was a tornado the day of the rehearsal, issues with travel for some wedding party members, one thing after another. It was pure chaos. But the wedding day was absolutely perfect and it’s a great allegory for our marriage – fighting through storms is what we do,” Edward said.

“We’ve been married for 12 years and people still talk about how much fun they had at our reception,” Javacia says. “It was one big party with the one of best DJs in town.”

Words of wisdom: “What makes our marriage work is that we are true partners,” Javacia said. “There’s never this idea of trying to win a fight because we know we’re a team. We either both win or both lose. Period.”

“Also,” she added, “we’re friends first. Because we were miles apart for the beginning of our relationship, our friendship is strong and that’s what keeps our marriage strong,” she said. “We grew closer through text messages, letters, and late night phone calls. It may be cliche to say communication is key, but it’s true.”

Edward agreed, “Communication is key,” he said, “and I can’t stress it enough. So often partners make the mistake of expecting their spouse to guess what they’re thinking. And when that spouse doesn’t or is unable to, feelings are hurt on both ends…” he said. “It’s not fair to either side. Be open and be honest. It makes for a healthier relationship.”

It’s also important to make time to be alone. “We are both very ambitious and therefore both very busy,” Javacia said. “Because of this, we have to be very intentional about spending time with each other and we don’t always get it right.”

Edward said, “We have a shared physical calendar where we write out our schedule for the month, including any after-work events and appointments that we have planned. That way, not only do we know what’s going on in our individual lives, it allows us to block off alone time for ourselves. Free time rarely happens organically in our lives, so we have to be intentional about making time for our relationship.”

Happily ever after: Javacia is a Birmingham native who grew up in Ensley and North Birmingham and graduated from the Alabama School of Fine Arts where she now teaches. She is also a writer and blogger, and the founder of ‘See Jane Write’, a website and community organization for women. Edward is a native of Portsmouth, Virginia. He currently serves as Senior Content Producer for the City of Birmingham, and also works as youth director at Greater St. John Missionary Baptist Church in Birmingham’s Powderly neighborhood. He runs the pop culture blog SoulInStereo.com.