On Thursday, September 6, United Way of Central Alabama kicked off its 2018 campaign at the downtown Birmingham-Jefferson Convention Complex. The campaign is how United Way generates the funds needed to support essential, life-changing services that are delivered to tens of thousands of people.

The guest speaker for the kickoff was Liz Murray, who was formerly homeless and transformed her life of despair into an inspiring journey of determination, hope and hard-won success.

The child of drug-addicted parents who routinely ate from dumpsters and sought refuge at all-night subway stations to survive, Murray was homeless at the age of 15—and fending for her life.

Determined not to be defined by her circumstances, she recognized education as the key to a fresh beginning and a whole new way of living. She earned her high school diploma in just two years and won a scholarship to Harvard University that would turn her bleak circumstances into a future filled with limitless possibility.

A Samford University graduate, Register first got involved with United Way in 2002, when he returned to Birmingham with his family after holding several corporate positions across the nation. The first committee he volunteered for was a “visiting allocation team”, a group of professionals who perform on-the-ground audits of the nonprofit agencies supported by United Way.

“I just developed a real strong respect for United Way, the way they carefully made sure every dollar was spent properly,” said Register.

From that initial experience, Register began a decade-and-a-half journey with United Way, joining its Pacesetter Campaign, co-chairing a committee to enlist new companies to join the United Way annual campaign, and serving on additional committees supporting the delivery of services that make a powerful difference in improving the lives of others.

Leading the annual United Way Campaign is a massive undertaking. More than 55,000 individuals and 800 companies donate to United Way of Central Alabama within a five-county region that includes Jefferson, Shelby, Blount, St. Clair and Walker counties.

“It’s a big deal for all the right reasons,” added Register.

“Our community is truly what I like to call a ‘brother’s keeper’s’ community. I don’t feel like we are content to sit by and watch others fail. The United Way is constantly looking at the needs on a local basis. I love that focus on local.”

Register described one such United Way program he has personally participated in, the Meal on Wheels program. Several years ago, United Way saved our community’s Meals on Wheels program before the program dissolved leaving hundreds of people without food.

“I remember when United Way took on Meals on Wheels very vividly,” he recounted. “One of the things I really like about Meals on Wheels is that it really crosses socioeconomic boundaries. So if you have a senior that is infirmed in their home, and not able to get out, we deliver to their home.”

He stressed, “In most cases, it wasn’t about the food, it was about the touch. United Way not only met a physical need, but it also met an emotional need by visiting with those receiving the meals and providing a warm smile and a friendly conversation. When we’re delivering meals, we may be the only person who the recipient sees and speaks with all day.”

When Bham Now asked what his personal goals are for the 2018 United Way campaign, Register chuckled and said, “Other than eradicating the world’s problems?”

“What that would mean to me is that more and more donors would recognize the essential nature of the wide range of services United Way supports – and trust us with their donation because they recognize the integrity of our organization. I trust that you will take this dollar and allocate it and put it to work in a way that will change our community and make things better. Not just an immediate need, but things that lift people up,” he said.

Register then started listing some of the 80 agencies and programs United Way of Central Alabama supports… Meals on Wheels, Crisis Center, 2-1-1, its Bold Goals initiatives, just to name a few.

He concluded, “United Way helps someone literally every second of every minute of every hour of every day. Join us.”

You can start lifting up our community by joining the 2018 United Way Kick-off Campaign event or contact United Way of Central Alabama today be a part of touching the lives of our neighbors every second and minute of every day. 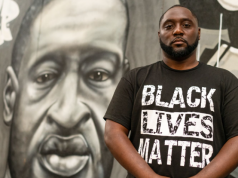