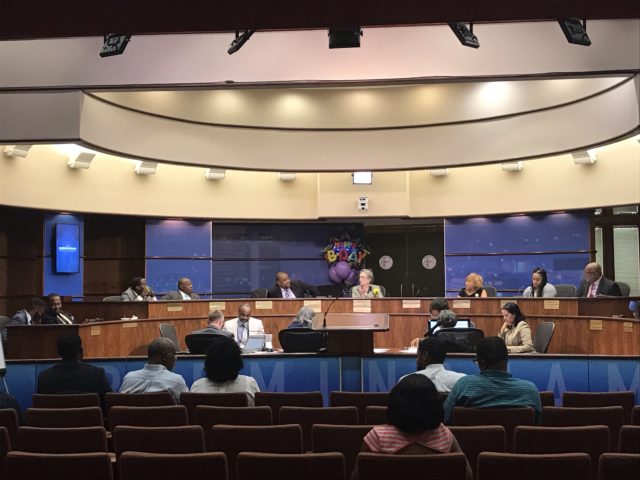 Alabama’s near-total ban on abortion bill signed into law last week, may cost the city of Birmingham two information technology companies that had been considering the city, said Mayor Randall Woodfin on Tuesday.

One of the companies outright canceled its plans and the other expressed concerns, according to the mayor who did not identify the two companies, citing a nondisclosure agreement.

“As far as [the companies] relocating here or expanding here that has caused some friction,” said Woodfin. “They are wanting to put a pause on coming here. I think for a company, they have core values. They have quality of life issues they speak to . . . so it’s not just about choosing a city.”

Locating in an area is about more than hiring new people, Woodfin said. “It’s bringing existing employees from another area to our city, to our state and they want to make sure that the quality of life for their employees is taken care of and not compromised.”

Last week, the GOP-dominated Senate voted 25-6 to make performing an abortion at any stage of pregnancy a felony punishable by up to 99 years or life in prison for the abortion provider. The only exception would be when the woman’s health is at serious risk.

The move caused national outrage and put Alabama in the spotlight for all the wrong reasons.

Despite the companies reevaluating their decision to come to Birmingham, Woodfin said he has been actively reaching out to members of the Jefferson County delegation, the governor’s office and businesses.

“When we make certain decisions, it has an adverse negative ripple effect on our ability to recruit jobs, economic development and industry to our city. It makes my job as mayor harder… we will continue to be aggressive in recruiting jobs,” said Woodfin. “We will explain that regardless of what’s taking place in Montgomery, the city of Birmingham is open for business. The city of Birmingham is a progressive place and the city believes in supporting employees not just in a city but any employer with their employees within our city.”

Other city officials also said they were concerned by the fallout of the legislative action.

Councilor John Hilliard, chair of the council’s Economic Development Committee, said the state should be moving forward, not backwards.

“This is really going to affect our economic development in Birmingham and across the state of Alabama,” he said. “At a time when we have gained so much I hate to see Alabama take a step backwards so that other cities  that are competing with us will benefit.”

Hilliard added it will be harder to recruit jobs to the city. “Now we have to be put in a situation where we’re begging corporations not to cancel,” he said. “We’ve already lost one company… we cannot afford to continue to lose businesses. We hope . . .  Alabama understands that the rest of the world is going in a different direction.”

Council President Valerie Abbott said it was “discouraging” the businesses were reconsidering Birmingham.

“Alabama is a poor state and we need all the economic development help we can get and yet, people will make decisions based purely on politics that hurt our state,” she said.

Abbott said other states seem to be “making the same dumb moves.” However, there’s not much comfort in having company, she said. “If we’re all waiting for the gallows, the fact that I’ve got six people with me doesn’t make me feel any better about being hanged.”