Regardless of where you live in the United States, this time of year brings something (other than hot weather) that affects everyone: mosquitos. No bite is more common than the bite of a mosquito.

They are itchy, annoying, and can even determine if you go outside at all, or if you do, for how long. For the overwhelming majority of us, that is the extent of what we know about mosquitos. Well, that’s about to change.

Let me begin by letting you know that there are many types of mosquitos. There are over 3,000 different species of mosquitos, with approximately 175 of them found in North America. These jokers have been around for more than 30 million years, so I wouldn’t expect them to be going away anytime soon.

Now, since most of us see them as these pesky little critters, it’s important to know that in many ways, mosquitos are the deadliest creature on earth. In fact, as a result of the diseases they cause and spread, mosquitos are responsible for more deaths than all the wars ever fought throughout history. Truth be told, most of these deaths are the result of diseases like yellow fever, dengue and encephalitis; all transmitted by mosquitos.

Even though there are many types found in the United States, each region of the country tends have one or more species that are unique to the area. For example, one of the most dreaded things about a trip “down South” during the summer is the reputation of the mosquitos. This is all because of the notorious Asian Tiger mosquito; the most common mosquito in the South.

This little booger, unlike most “sensible” mosquitos that do their biting at dusk and around daybreak, the Asian Tiger will tear into you at any time during the day. This why so many Southern picnics and outings are cut short due to mosquito bites.

Ok, enough about their genealogy, let’s talk about the actual mosquito bite.

Mosquitoes hunt for food by detecting body heat and the carbon dioxide humans exhale. However, only female mosquitoes suck our blood. Male mosquitoes feed on plant nectars. In fact, males don’t have the “teeth” for it. Only the female has a mouth that is built for piercing your skin. In fact, the female doesn’t “bite” you; instead she pierces your skin in order to suck your blood to fertilize her eggs  (in order to make some more little mosquitos to do the same).

Once your skin is pierced, the female will begin to suck your blood, but it doesn’t stop there. She will not only suck your blood, but she also spits in her own saliva, containing proteins that will keep your blood from clotting, and clogging up her “straw.” There is also the potential for her saliva to contain disease if she is carrying a virus or bacteria she picked up from another source along the way. This is where the diseases like yellow fever, dengue and encephalitis come in. It passes these potential diseases on when it “bites.” Since it doesn’t get a complete feeding all at one meal, she will move around and get a little blood from multiple victims. This is what will increase the likelihood of spreading infectious diseases.

So now you’re wondering about the bite and the itching from a mosquito bite!

Once you’re bitten by the mosquito, your body’s immune system releases antibodies that are instructed to attack the invading substance. The antibodies cause swelling and inflammation and contains histamine, which is responsible for the itching. The problem comes when you (like any reasonable human being) start to scratch that itch. The more you scratch, the more it itches! This is made even worse if, while scratching, you break the skin, leading to a possible infection.

So, now the big question: Why is it that when you’re at a cookout with 30 other people, you seem to be the one that attracts the mosquitos?

Mosquitos are attracted to carbon dioxide. We all expel carbon dioxide when we exhale, so if you want to be totally mosquito-proof, just try holding your breath (please don’t try this, it’s just not possible). Some theories suggest that they are also attracted more to certain blood types. No truth to that. Mosquitos pick up your scent over 100-feet away, and by the time they bite, you’ve already been targeted. Bottom line, body heat and carbon dioxide are what makes you a delicious mosquito meal.

There are some tips to keep in mind: 1) since pregnant women are breathing for two, they tend to give off more heat and carbon dioxide; 2) athletes sweating is another factor that makes a better meal; 3) as does anyone who sweats a lot in the hot weather; 4) drinking alcohol will increase your internal body temperature, making you breathe more to keep cool in hot weather. 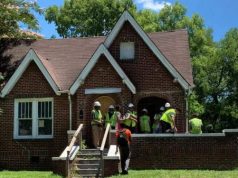 Meet the Ensley Students Who Are Ahead of The Class

Drew: How to Decide Between the Virtual or Traditional Classroom