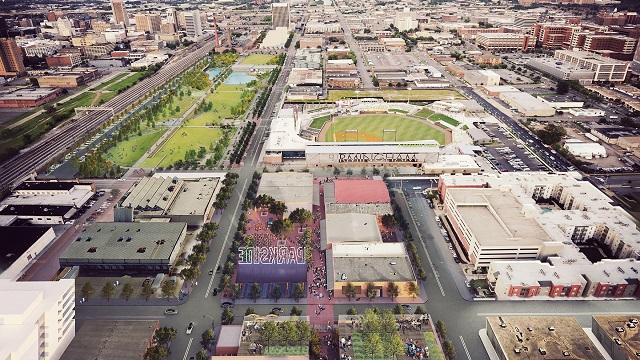 “Connectivity and walkability are core principles of our mission to build a better Birmingham,” said Hunter Renfroe, founder and principal of Orchestra Partners. “Partnering with Tom Leader will help us rebuild connections between Birmingham’s central business district and its surrounding neighborhoods by leveraging Railroad Park and the Red Rock Trail System as pathways of connection.”

Tom Leader, founder and principal of California-based TLS Landscape Architecture, was the lead planner and designer behind the development of Railroad Park from 2005 – 2010, a time during which he developed a deep commitment to Birmingham. Over the last decade, Birmingham’s “living room” has formed the core of the Parkside District and received national recognition for its successful efforts to spark the rebirth of downtown Birmingham.

“I’m honored to help build on the momentum created by Railroad Park,” said Leader. “We always hoped and planned that the urban growth surrounding the park could extend this vision of vibrant community gathering and sense of civic optimism. This project is about paying tribute to the Magic City’s past and laying the framework for the future.”

The next century will be different than the first for the historic Powell Avenue Steam Plant.

“This project gives us the opportunity to preserve a group of classic midcentury warehouse buildings in this underutilized historic district on the west end of Railroad Park,” added Renfroe. “Revitalizing these buildings through adaptive reuse will help us preserve a major piece of Birmingham’s history while transforming this district into a critical western anchor point for Parkside.”

On the east end of Parkside, the integral component of the master plan features the redevelopment of Alabama Power’s Powell Avenue Steam Plant, a prominent symbol of growth and energy from Birmingham’s history. Built in 1895, it provided steam and electricity for downtown businesses and connected the city by powering its streetcar system.

In the master plan, Powell Avenue Steam Plant is designed to once again serve as a connection point for Birmingham, forming Parkside’s eastern anchor and using the Rotary Trail to connect with neighborhoods to the east. Railroad Park will continue to be Parkside’s central gathering place while the western blocks will become an anchor point for connections to Titusville and surrounding western neighborhoods.

“For more than a century, Powell Steam Plant played a pivotal role in shaping Birmingham’s growth,” said Tony Smoke, vice president of Birmingham Division for Alabama Power. “Now this historic structure will become a symbol of modern urbanization and economic development, connecting our communities to celebrate the future of Birmingham.”

The story originally appeared on www.alabamanewscenter.com