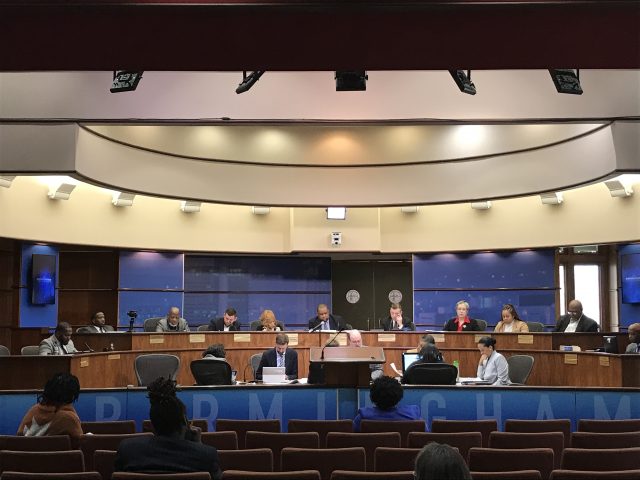 The Birmingham City Council on Tuesday voted to approve a contract with ParkMobile to add a pay by app parking payment option to city meters.

The council voted 7-2 with Councilors Steven Hoyt and Clinton Woods against the contract.

The panel also approved by an 8-1 vote to amend the city’s parking ordinances to allow for coinless payments, with Hoyt the no vote.

ParkMobile helps motorists find and pay for parking on their mobile devices. Users will be charged a $0.45 convenience fee to pay by app per transaction. ParkMobile will receive $0.30 of that fee and $.015 will be for a card processing fee. The contract offers the ParkMobile service at 8,000 parking spots in the city for the next three years and will include street and deck parking.

“This is a huge step forward for modernizing and making parking much more customer oriented, friendly, modern and easy,” said Lakey Boyd, Deputy Director of the city’s Department of Transportation.

Motorists should be able to use the app in 60 days.

Though people will be able to pay by app, the city will not be removing the ability to still pay with coins. However, citizens and visitors will no longer be able to use the ‘broken meter’ excuse, Boyd said because they can still pay through the app even if the meter is broken because each meter will have ParkMobile usage stickers.

Councilor Darrell O’Quinn, who chairs the transportation committee, said he is enthusiastic about modernizing parking, but did have some reservations after other councilors raised concerns.

Hoyt said his concern was about minority participation.

O’Quinn said he believes most of the concerns were addressed. “The first one was really about exclusivity and why we were pursuing having only one payment vendor whereas in some cities they allow for multiple payment options and multiple different apps.

“I brought up that question about the exclusivity because as an elected representative of many of the people who will have to pay this convenience fee, I thought it was our responsibility to explore that question of why is it the best path for us to consider this and make sure we’re protecting the public’s interest.”

Despite some of those reservations, O’Quinn still believes ParkMobile is “a major leap forward for us . . . we have antiquated technology on our streets when it comes to parking meters, a lot of folks complain about the parking meters not working,” he said. “Beyond that, just the fact that you have to use quarters and there is no other options has been a major source of complaint for many, many years.”