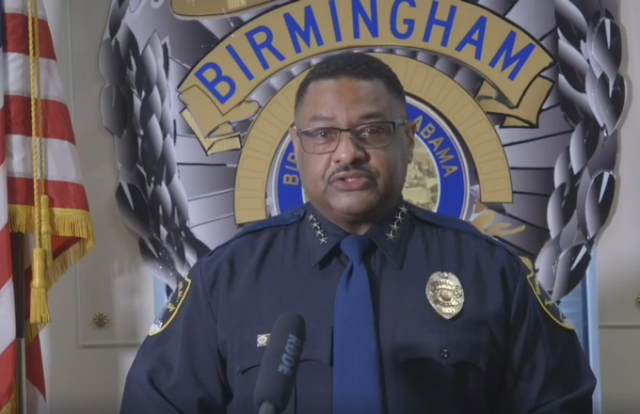 As 2020 ends in Birmingham with homicides up by 13 percent over 2019, Birmingham Police Chief Patrick Smith on Wednesday announced a number of steps to reduce crime which include focusing on specific areas of violence, pursuing perpetrators more aggressively and training.

“We plan to move our tactical operations precinct over into our investigative bureau so that our citywide taskforce and crime reduction team can receive immediate information on those wanted individuals and provide immediate follow up apprehension,” said Smith, during a morning press conference with Mayor Randall Woodfin, who later in the day tested positive for COVID-19.

(Everyone who attended the press conference with Woodfin will quarantine and be tested; and Smith is experiencing no symptoms, said Ariana Garza, public relations manager for BPD. Woodfin is recovering from his home).

There were 93 homicides in Birmingham at the end of last year compared to the 105 this year, which increased homicides by 13 percent. The 105 homicides do not include 15 that were ruled justifiable, Smith said.

He said a SARA model will be used to address specific areas of crimes and problems within the community. SARA is the acronym used to refer to four stages of problem solving – scanning, analysis, response and assessment.

And the department will focus on increasing training for detectives and implement the Police Emergency Advocacy Team (PEAT) where social workers will be paired with officers to address repeat domestic violence offenders.

“We will continue to push forward with more community engagement with the police department and develop community focus groups so that we have more information sharing to resolve crime,” he said. “. . . Crime doesn’t simply fall at the doorstep of the police department only. This is a violation of our communities and we need the community involved significantly . . . We need you to speak up, we need everyone to be involved. If you see something, say something.”

The mayor, who lost his brother to gun violence in 2012, said he’s learned from personal experience the impact of crime on families and how the community can assist.

“My brother’s killer was convicted,” he said. “I can only imagine how that witness felt the day of that trial, I’m sure she was scared… but through her fear, she pushed on for justice. My family is so thankful for not only her testimony but for the dedication of law enforcement and so many others who worked the case.”

It wasn’t until his family experienced that tragedy that he understood how genuine the bond between police and community must be to address gun violence, Woodfin said.

“If this witness had not come forward… then my brother’s case would still be unsolved today. That’s how it works. Witnesses and neighbors need to rally for every murder like they do for their own families or for extreme cases.” 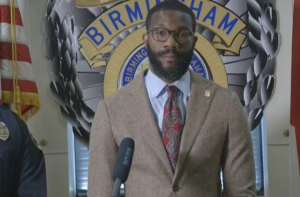 Of the 105 homicides this year, 62 remain unsolved, and there’s a reason, the mayor said. “In part because there are some people who know who are behind these killings but they won’t say anything. Detective after detective has told me that they know who killed the victim in their case and have tried to get witnesses to come forward, but witnesses refuse. It’s a sad cycle, it’s an unjust cycle, it’s a cycle that just simply needs to stop in our community.”

He also spoke of families who have lost loved ones.

“Our hearts go out to the families, but the truth is the families deserve more than our hearts and prayers, they deserve justice,” he said.

While homicides are up, crime in all other areas are down including rape, (down 45 percent); robberies, (37 percent); violent crime, (20 percent); and property crime, (26 percent), Smith said.

“The best part is our officers continue to be engaged and committed to providing quality service to all communities,” said Smith.