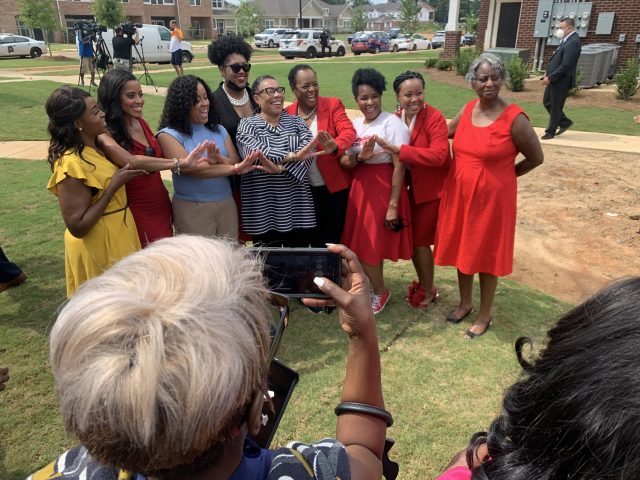 The Build Back Better agenda is focused on housing, jobs and providing economic opportunities for large and small businesses which are part of a recently passed $1 trillion dollar infrastructure bill in the U.S. Senate that has been sent to the House of Representatives.

Build Back Better is framed significantly around recovery from the COVID-19 pandemic which shed a light on the importance of housing, Fudge said.

Housing is an issue which particularly affects people of color, Fudge said.

“We are going to do a lot more to make sure that people of color and low-income people and moderate people can buy a home,” she said. “As people of color, we know that is the first place by which we build generational wealth is to buy a home, but we’ve made it so hard because we make it more difficult to get credit just because of what we look like.”

Mayor Randall Woodfin said the Build Back Better plan will help “build or restore” more than two million affordable homes and will help areas that have been ignored in the past.

“It will drive down costs of housing dramatically, expanding our supply of affordable housing,” Woodfin said. “On top of lowering costs, these historic housing investments are specially targeting communities of color, helping to create energy and efficient, sustainable infrastructure in historically underserved areas.”

Sewell, who represents Alabama’s seventh district, which has been hit hard by a lack of housing said her district is “tough,” with “a resilient spirit.”

“We know that we’ve had systemic disinvestments that have prevented too many of our people from reaching their full potential,” she said. “We know that issues like pollution and lack of affordable, quality housing has really set us back, but we also know what’s possible. We see it right on this site, [the Villas at Titusville].

Fudge said Biden has given her “broad latitude” to improve American livelihoods. That freedom was surprising, she said.

Student debt, Fudge said, is something that has particularly hurt people of color and poor people.

“We are doing a lot of things that I think are going to be helpful, we’re dealing with student debt [which has] has always been a barrier for people of color. I came out of school with a lot of student debt, but who has student debt? Black people, brown people, poor people. The system has been really weighted against us, but it is my job to change it.”

The Housing Authority of the Birmingham District (HABD) president David Northern said the city is headed in the right direction for housing.

“We have some amazing challenges, but our challenges are really opportunities…we see [up to] $100 million of development going on, which will massively affect our economy,” Northern said. “With the guidance of our board members, our elected officials, the clients, the residents we have, we will have much brighter days into the future.”