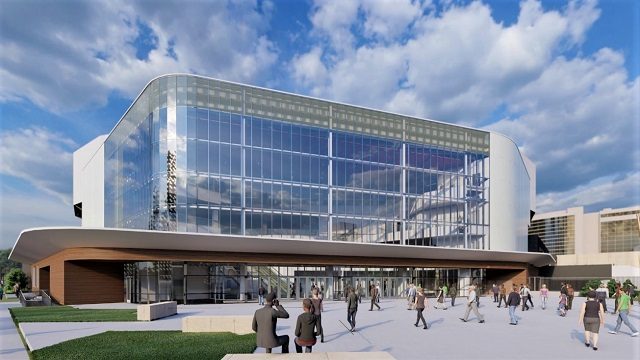 Dennis Latham, chair of the Birmingham Jefferson Convention Complex (BJCC) board of directors, said it’s fitting that the completion of the Legacy Arena renovations comes during the year of Birmingham’s 150th anniversary.

“Work on the BJCC complex itself began around the 100th anniversary in 1971,” Latham said. “Since that time municipal leaders and the corporate community have gathered together to collaborate to create opportunity…The arena renovation is a strong example of honoring those community leaders’ visions some 50 years ago and moving forward.”

Cornell Wesley, director of the city’s Department of Innovation and Economic Opportunity, said the Legacy Arena renovation, a result of “regional partnership is designed to enhance our role as a destination city for sports and entertainment.”

Jefferson County Commission President Jimmie Stephens, who also serves on the BJCC board of directors, said he and other elected officials have fulfilled their duties “to improve and enhance the quality of life of citizens.”

“This is a pretty good example of getting that done. Another challenge that we have is to be able to work together and to create an atmosphere, citywide, countywide and metro-wide for you, the investors and stakeholders, to be successful,” Stephens said, “and this is a primary example of that.”

Birmingham City Council President Wardine Alexander said a recent study found that the expansion of the BJCC will generate almost half a million dollars in annual revenue for the city.

“The overall [$125] million renovation, modernization and expansion, along with these incredible amenities to increase the entertainment experience are a bold reflection of the commitment to our city’s economic development and growth,” Alexander said, “as well as what can be achieved through incredible teamwork and community partnerships.”

Glenn Bryan, chief operating officer for Legacy Credit Union, the namesake of Legacy Arena, said he felt “really good” to see the Legacy logo on “such a beautiful building.”

Tad Snider, CEO of the Birmingham Jefferson Civic Center Authority, said the staff at Legacy is rushing to have the facility ready for Sunday when the Birmingham Squadron, the NBA G League affiliate of the NBA’s New Orleans Pelicans, will play their first game in the renovated space.

“We’re gonna be washing windows and touching up paint and doing all those things up to the last minute…We’re in that rush to get done. But it’s an exciting time,” Snider said.

The arena, which first opened in 1976 as the Birmingham Jefferson Convention Complex (BJCC) Coliseum, has previously hosted a variety of entertainment events, including concerts from musicians like Michael Jackson, Elvis Presley and Prince. The venue has also hosted two Davis Cup tennis tournaments, numerous college basketball tournaments and events like the Ringling Bros. and Barnum & Baily Circus and Monster Jam.

Since April 2020, the arena has been under renovation. The entrance has been changed to feature huge windows, and the arena has seen new amenities such as new concession windows and suites, as well as improvements in numerous areas including its lighting, sound, number of bathrooms and accessibility.