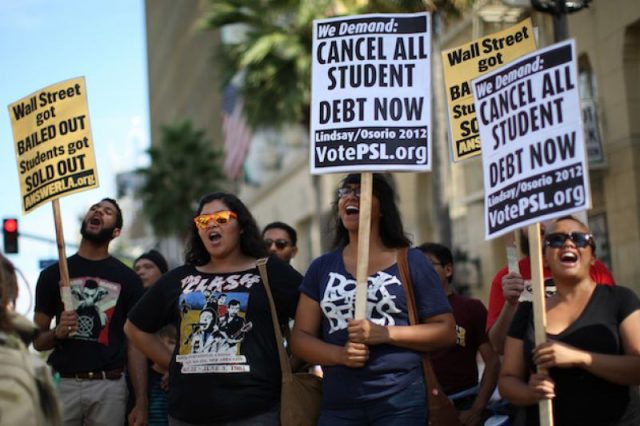 In just two months, the pause on federal student loan repayment will come to an end. Many borrowers are not financially prepared to resume payments due to the lingering effects of the pandemic, particularly women, who disproportionately shoulder two thirds of the $1.7 trillion of federal student loan debt.

That’s according to a new report released by the Center for Responsible Lending (CRL), a research and policy group focusing on consumer lending. Using datasets from the Census Bureau’s Household Pulse Survey and a focus group of 33 diverse women who lost or left their jobs during the pandemic, CRL found that women today have less job security than before the pandemic, and any gains experienced by the economy in 2021 fell inequitably towards white people, in particular white men.

The report concludes that, for economic equity, student debt should be cancelled across the board, $50,000 per borrower.

Sunny Glottmann, a researcher with CRL and co-author of the report, said that she and her fellow researchers wanted to understand how student loan balance impacted the finances and financial well-being of women as they “persist through an economic hardship.”

“We find that young people, especially young women of color, are now in a position where they are less able to build a life that has all the benefits of economic prosperity” said Glottmann. “Black and Latina women are working their tuchuses off to provide for their families and have no real promise of being able to get out from debt. And that is a really, really tough burden to bear.”

Dr. Stella Flores, an associate professor of higher education and public policy at The University of Texas at Austin, said that the results of this report should not come as a surprise due to the pre-existing racial and gender wealth gap in America.

“Owning a home and the transfer of wealth tends to pay for college and homes. For generations, Black and Latinx and Native Americans missed out on that opportunity to earn any wealth because of legal discrimination. It builds up,” said Flores. “The racial wealth gap is one of our biggest problems in this nation and an uncomfortable one. Certain groups had honors imposed on them because of race, that only whites and white men could earn the wealth that ultimately pays for education, housing, and health.”

Flores added that borrowers are often told their burden of debt is due to bad personal choices, as opposed to centuries of racial wealth and class gaps.

Of the 33 women in CRL’s focus group, only four had paid off their student loans. Of the remaining 29, those that identified as Black or Latinx were more likely than their white counterparts to have a student loan debt greater than $50,000. Each confirmed they took full advantage of the federal repayment pause, and two-thirds either said they were not ready for loan repayment to begin, or that resuming payments would cause stress.

Women’s wages are less on average than a man’s earnings over time.

Katherine Welbeck, director of advocacy and civil rights counsel at the Student Borrower Protection Center, a nonprofit focused on alleviating student debt, said the gender wage gap speaks to the value society places on the work of women.

“It’s really a matter of equity and economic justice to fix [the loan crisis],” said Welbeck. “The gender pay gap, the costs of childcare, and so many other costs women bear, we have to put that into the ways that student debt disproportionately effects women.”

Women are more likely to engage in jobs that have high interpersonal contact, those most impacted by a pandemic that required social distancing. In February 2020, 77.4% of all jobs in education and healthcare were held by women, according to the Bureau of Labor Statistics. The majority of jobs lost during the pandemic were held by women, according to a 2021 report from the National Women’s Law Center.

Sabrina Calazans, director of borrower outreach at the Student Debt Crisis Center, a nonprofit working to end student debt, agreed with the report’s conclusion that student debt should be cancelled. Calazans actively liaisons with student borrowers, working to share their stories with those empowered to impact policy.

“The biggest connecting thread I’ve seen [between borrowers] is shame and guilt, because people were told to go to college, that it would help them in social mobility, and they’d be in a better position because they went to school. But because of the barriers faced by students of color and women, they’re saddled with this debt—working, but they can’t pay it off,” said Calazans. “A lot of people fall into default and have their wages, social security, and even taxes garnished. It’s putting people in a worse spot than they were before.”

Flores said that while loans have an important purpose in helping people climb the ladder of social mobility, a robust public policy debate on the widening of wealth inequities is needed.

“There has to be more innovative ways of cancelling loan debt for the nation. Can there be donors, or charitable contributions? It doesn’t just to have to be government.” said Flores. “If you think about it, $50,000, $40,000, $30,000 to a low-income person, that’s still insurmountable. If you were to forgive that, what you’re doing is freeing human capital to develop their own and future generations without the heavy burden—the bricks on their back—that is debt.”

Liann Herder can be reached at lherder@diverseeducation.com.