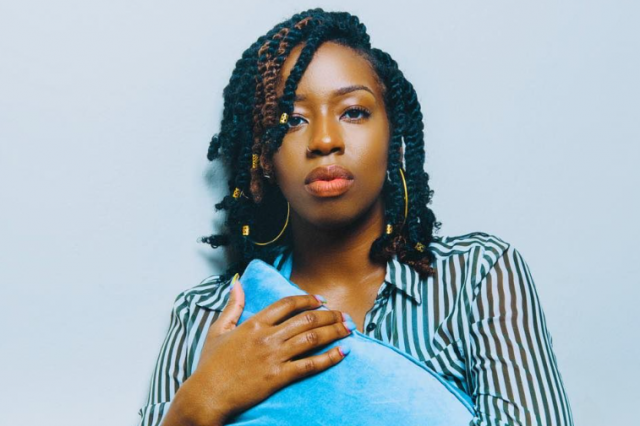 While working at a mobile communications store in Homewood A.Nichel found herself drawing more than selling phones until her boss told her to put down the pencil and do her work.

“That’s when it really hit me drawing should be my work,” said Nichel.

Since then, the Dolomite, AL, native has made a remarkable impression on A-List celebrities and many others with her paintings.

When her life-sized finger-painted canvas of the late rap star, Nipsey Hussle, was re-posted on social media she caught the attention of celebrities such as Cardi B, Trina, Sinbad, and more.

Record producer Phalon Anton Alexander, professionally known as Jazze Pha was impressed my Nichel’s art he messaged her on Instagram for a portrait of his sister and mother.

As a master portraitist and visual artist, Nichel is also known for her portraits of Jay-Z, Kendrick Lamar, Nicki Minaj, Eddie Murphy, and Wesley Snipes. Not only does she paint celebrities but her “strategic aggressive marketing” has gotten her paintings in the hands of some of them.

When coming in contact with celebrities via social media or in person she likes to build a relationship while showcasing what she is capable of doing. “When I meet celebrities I like to show my appreciation for what they contribute to the world,” said Nichel.

The goal is for each person she encounters to keep her in mind when they need artwork. For example, she has been invited to former heavyweight champion Deontay Wilder’s home to present a painting in person.

One of her most treasured pieces is a life-sized portrait of comedian D.L Hughley who told her “he had never seen any other tribute of him done on that level before.”

“I reached out to Debbie Allen on Instagram to donate a piece of artwork to the Debbie Allen Dance Academy then she invited me to the grand opening,” said Nichel.

Allen shared the portrait on Instagram and gave Nichel a shout out while commenting “she’s brilliant.”

“I flew out to an art gallery in California to support artist Tiffanie Anderson. While I was there I met Tina Knowles-Lawson and her husband Richard Lawson. They suggested I put my artwork in their virtual auction called Waco Theatre Center located in North Hollywood Arts District of Los Angeles,” said Nichel.

Asked how it felt to have her paintings showcased in celebrity homes Nichel replied, “It feels like a dream come true because I’ve always saw myself working with celebrities. It doesn’t feel real sometimes and sometimes it feels too real.”

Depending on how detailed the artwork it can take one to two hours or 72 hours depending on the size, said Nichel, who works out of a home-based studio in downtown Birmingham.

Growing up, Nichel was raised by her mother in a single parent household with four brothers and one sister.  “I remember during registration for school I would always try to take electives that had nothing to do with art but somehow I always ended up in art classes,” said Nichel.

After graduating Hueytown High School in 2010, she stopped drawing for about seven years. Because she started drawing so late. Nichel, 29, said it felt more like a chore oppose to a career she would pursue.

In 2017 Nichel graduated from Lawson State Community College with a bachelor’s degree in graphic arts and communications. While there she met an artist by the name of Lilly who was painting pictures of landscapes in watercolors. “And they were so beautiful,” said Nichel. “I love flowers and watercolor. I eventually asked her to teach me how to do it.”

That was the start to A.Nichel Artistry. “I started painting faces. I just painted and painted until I perfected my craft.”

“A girl reached out to me and she asked me to paint a picture of her and that she would pay me. I charged her $55,” Nichel said. That was her first sale.

“That’s when I knew I could make money doing this. People say there’s no money in art but the world is art,” Nichel said.

Months later, Nichel did paintings of Jay-Z and Kendrick Lamar. “The moment I posted it on my social media this guy I know that owns a club downtown [Birmingham] commented immediately and said, ‘I want to buy this piece,’” recalled Nichel, who describes herself as a “detailed” artist because of her attention to detail has grown to like acrylic.

“I play with almost everything. I probably will start using gouache paints. I really use acrylic now because it dries quick and I can move on to other projects quicker,” she said.

Although Nichel made a name for herself when she started doing celebrity portraits her focus is now on sharing messages through Black portraits.

“It doesn’t necessarily have to be a celebrity but right now I’ve been painting true Black skin,” she said. “I used to paint Black people, but I was afraid to play with the different browns. Now I’m trying to implement certain color tones in my artwork. I want people to step back and say, ‘wow he or she is really Black,” said Nichel, who is currently working on art pieces for her first exhibition in California later this year.

Nichel said she ultimately wants people “to feel my work and try to find themselves in it.”