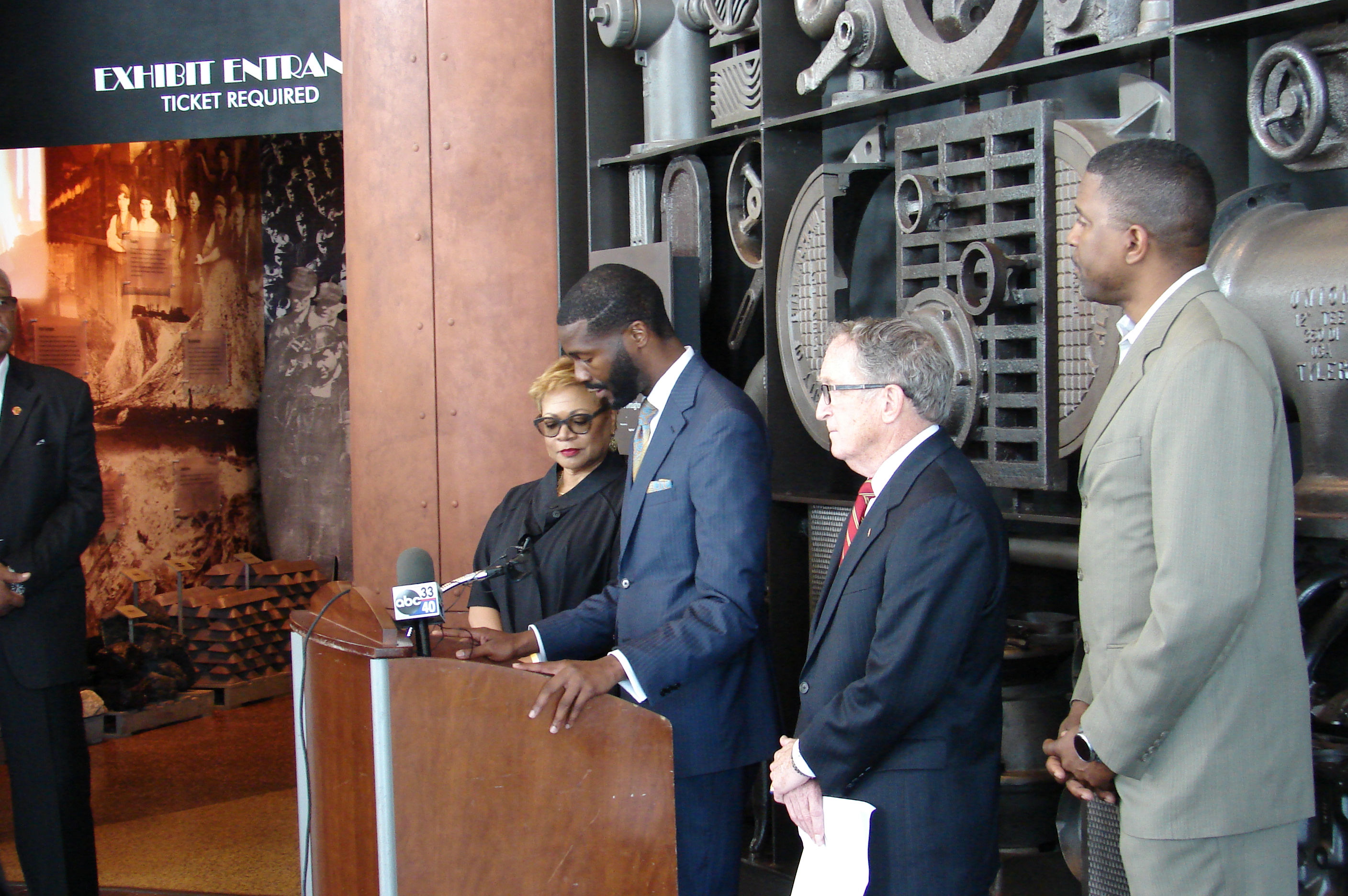 Birmingham’s Mayor-Elect Randall Woodfin today announced a transition team spearheaded by a retired business executive and a former military leader and college president to oversee his transition into the mayor’s office.

Woodfin announced that he plans to take office next month and will assess the finances and leadership in every city department.

Woodfin, 36, the youngest elected mayor in Birmingham in more than 100 years, defeated incumbent William Bell in an Oct. 3 runoff, capping a fractious mayoral election that began with 12 candidates running for the city’s chief executive.

Krulak said that the Woodfin administration could mark a turning point for a city which has “made great strides since the 1960s. It’s gone from a beacon of civil rights to a beacon of human rights to a revitalization of our downtown that we see today,” he said. “At the same time, we can’t turn a blind eye to the problems that continue to exist. Neighborhoods that need revitalization, an education system that needs increased attention and support, concerns about regulations and bureaucracy and their impact on growth opportunities… Birmingham now stands at an inflection point and we need to take advantage of it.”

Krulak compared the effort to turn the city around to a military campaign. “The major priorities of the Woodfin administration tackle many of the real issues that the city faces,” Krulak said. “From my own background, like war, success or failure does not depend on one man. It depends on people coming together to achieve success in a great endeavor. I am a foot soldier who’s joined our fine mayor-elect in that great endeavor.”

Knight, a native of east Birmingham’s Zion City neighborhood and chairwoman of the board of managers for Birmingham Times Media Group, said Woodfin has the potential to move the city forward. “If anybody could get me out of retirement, it was Randall Woodin,” she said.

“We’ve made some great strides in recent years on many fronts. And I believe we’re on the cusp of becoming a truly great American city. But we must first address real issues that face all of our citizens, from neighborhood revitalization to education to reducing crime to eliminating red tape from city government so that Birmingham is truly open for business and investment,” Knight said.

She added that she looks forward to working with Krulak to build “a transition team of capable, diverse and visionary leaders who can help Birmingham realize its full potential.”

The transition team is only the beginning, Woodfin said. “In the coming weeks, we will be announcing several citizen-led committees and develop plans for our strategic priorities, leading up to our swearing in which is Nov. 28,” he said.

Asked about the timing of potential department changes, Woodfin said he was more focused on the intended outcome. “The target is to have the best team at City Hall this city has ever seen,” he said. “I think it’s really important that as mayor I [should] not be the smartest person in the room. I think it’s also important that I have the best talent the city can offer in providing services to the people that live in our city.”

Woodfin said the city would open up the hiring process to get the best people into positions. “I’m looking forward to the opportunity to build a team, not just for the mayor’s office but each department that provides the best services as well as understands the morale of our employees of each of our departments as well,” he said.

During the press conference, Woodfin reiterated his priorities, making points that seemed to have resonated with voters during the campaign.

“Birmingham has some of the best and brightest leaders in the world, bar none, whether it’s healthcare or construction, entrepreneurship or manufacturing or education, or many other sectors,” he said. “We have many men and women with the talent, experience, drive and concern for public good that can make our city and our region truly great. However, these talents have not been fully realized because too often we have been seen as a region divided and a city divided. Many have focused on what we don’t have in common rather than the great opportunities we have working together.

“Nothing is more important to our future than tapping into all the talent and uniting our people to common causes that will make Birmingham the very best city and region it can be. In the Woodfin administration, our priority is to bring together the talent, in a spirit of cooperation, to create great progress and change for our city.”

Encouraging “every citizen” to get involved, Woodfin said all voices have value, and that he would make city hall transparent. “Priority one will be restoring trust in city hall,” Woodfin said. “We will be announcing a plan that will open up city hall to the light of day. We will demand ethics in all that is done. We will eliminate nepotism and cronyism to make sure that taxpayers dollars are spent wisely and that taxpayers can actually see how their money is spent.”

Neighborhoods, whose leaders have sometimes complained of getting the short end of the stick as Bell focused on downtown redevelopment, will be getting attention when he takes office, Woodfin said. He also emphasized, as he did during the campaign, that Birmingham’s crime rate needs to be addressed.

“Every day for the next four years we will focus on revitalizing all of our neighborhoods, making sure our parents, our grandparents, their children and our grandchildren are safe on their porch and their front yard,” he said. “We will be working to create affordable housing, expand access to health care, making sure we support small businesses, among other things.”

Improving both education and workforce development is a key to stemming the outflow of citizens from the city, Woodfin said. “We cannot stop our city population from declining until we make a real substantial commitment to education and workforce here in our city. That will require that we commit to our grandchildren and children that not only that we treasure their future, but the education and skills needed to get a job, a good paying job, to provide for their family. We will bring our education and workers and workforce leaders together to chart a course in this area that is second to none.”

Woodfin also sought to reassure business leaders that his administration would look for ways to help them succeed. “We want any business, small or large, to know that Birmingham is truly open for business and is supportive of growth and expansion,” Woodfin said. “We want city hall to play a support role in helping businesses grow in our community. Whether it is cutting red tape or bureaucracy that in the past has slowed down or discouraged business investment, we will be looking at other cities to find the best way to drive investment and growth which will result in a growing economy and increasing high paying jobs in our city.”

Asked about Police Chief A.C. Roper, Woodfin said, “My plan for Police Chief Roper is the same as for every department head … It’s important that I come in and assess not just the financial side of each department but also assess the human capital and leadership of each department,” he said, adding that he is committed to a “fair and open process” that takes “institutional knowledge” into consideration.

About the ongoing effort to lure Amazon’s second headquarters to Birmingham and other plans under the Bell administration including moving the police headquarters to a building in Ensley, Woodfin said he wanted to learn more details before deciding. “If they are in the best interests of our city, we wholeheartedly will support those projects,” he said.

What about the Confederate monument in Linn Park, which under Bell, was covered up by plywood in the wake of the monument-related protests that led to clashes between white supremacists and opponents in Charlottesville? Woodfin said he would consult with city councilors and other local leaders to determine what to do. Currently, the state is suing the city for violating a law designed to protect such monuments.

“If this monument should be removed, let’s remove it,” Woodfin said. “Let’s not necessarily cover it up and make it part of our continued conversation. So, it’s either going to stand and not be covered, or it’s going to be removed.”

Woodfin, who said he would be accessible to citizens, announced a way to contact the transition team, by email: transition@randallwoodfin.com