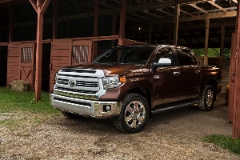 Bu Frank S. Washington
FARMINGTON, PA – The third generation of the Toyota Tundra went on sale in August. The automaker polled owners of the current Tundra as well as owners of competitive full-size pickups to make improvements in the 2014 model.
First up was styling. Owners said the old Tundra in so many words looked soft. That is the last thing you want people to think about a pickup truck. The 2014 rendition of the Tundra is more chiseled and brawny. The new Tundra actually looked taller than the vehicle it replaced.
The hood line had been raised and the grille was much more aggressive; the grille-surround and cross bars come in different styles and finishes to distinguish the trim lines. There were four new designs for the 18- and 20-inch wheels.
The headlights were switched to single bulbs, the fenders had integrated flares all round and the side mirrors had their own vortex generators.
Owners also wanted to see more sophisticated models so Toyota crated two more trim lines, now there are five: SR, SR5, Limited, Platinum and the 1794 Edition.
That number is a tie-in for where the Tundra is assembled, San Antonio, Texas. Toyota acquired 2,600 acres from the J.L.C. Ranch which was founded in 1794. In its move to have products designed and built in the markets where they are sold, the new Tundra was styled at Toyota’s CALTY facility in Newport Beach, California, the engine is sourced from its plant in Huntsville, Alabama, and the transmission is made by one of its suppliers in Durham, North Carolina.
Another complaint was the interior of the old Tundra; owners said it looked cheap. The old Tundra’s interior had lots of plastic and very little of anything else. It did look less than expensive. But that has been changed too.
We drove a 1794 Edition Tundra briefly and the interior was pretty good. It featured French stitching, leather and faux wood accents. There were soft touch points but more importantly Toyota says the ergonomics have been improved.
The center line of the instrument panel was moved 2.5 inches toward the driver making it easier to reach. The seats in the test vehicle were comfortable, the truck was quiet and it had plenty of power. Handling was nimble. Full-size pickups are not cars though they are equipped like sedans but the Tundra handled some U-turns and backup situations without a lot of fuss.
A backup camera across all trims lines is now standard. The 2014 Tundra can also be equipped with blind spot alert as well as cross traffic alert.
There are three cab choices: regular cab, double cab and crewmax. There are also three engine options. A 4.0-liter V6 makes 270 horsepower and 278 pound-feet of torque; a 4.6-liter V8 makes 310 horsepower and 327 pound-feet of torque and the top of the line engine is a 5.5-liter V8 that makes 401 horsepower and 381 pound-feet of torque.
The V8s are equipped with a six-speed automatic transmission and the V6 has a five-speed automatic. Depending on engine and whether it is two-wheel or four-wheel drive, the 2014 tundra can tow up to 10,000 lbs. and haul up 2,000 lbs.
The truck has the next generation audio system that included Bluetooth, voice recognition and USB and auxiliary jacks. Toyota’s Entune connects to a smartphone and has seven Apps that included Yelp, Facebook Places, Bing and Pandora. Obviously, there is satellite radio, a navigation system, Doppler radar weather information and predictive traffic information.
Prices start at $25,000 but can escalate to about $50,000 depending on the model and the equipment.
Frank S. Washington is editor of AboutThatCar.com