WASHINGTON (AP) — Supreme Court Justice Thurgood Marshall’s widow, Cecilia, has seen two showings of the new movie “Marshall” about her late husband. She liked it, but had one observation about actor Chadwick Boseman, who plays the civil rights pioneer and legal giant.

“He’s a very good-looking man, but he’s not as handsome as my husband was,” she told her son John after seeing the film, he said.

The question of looks aside, what moviegoers get in “Marshall” is a film faithful to the facts and to the man, according to those who have studied the real-life Connecticut rape case from 1941 and those who knew Marshall. He died in 1993 at age 84.

Michael Koskoff, a lawyer who wrote the screenplay with his son, says he began with the information he had about the case, then filled in the gaps.

In early 1941, Marshall was in Bridgeport, Connecticut, to represent Joseph Spell, a black chauffeur accused by his wealthy, white employer of rape. Because Marshall was an out-of-state attorney, he enlisted the help of a local lawyer, Sam Friedman, who was white and had expertise in trying civil cases, not criminal ones.

The movie, which came out this month, shows a 32-year-old Marshall, with one Supreme Court argument under his belt and more than a decade before his victory in the landmark Brown v. Board of Education case that outlawed segregation in public schools. Koskoff said there is “nothing particularly significant” about the case depicted in the movie, but it is representative of the legal work Marshall was doing in the early 1940s on behalf of the NAACP: traveling around the United States to defend black men accused of crimes, and doing it at great personal risk.

Koskoff said he reviewed old newspaper articles , investigators’ notes and what remained of court files. He looked at letters between Marshall and co-counsel Friedman and notes Marshall took during jury selection.

There was no transcript of the court proceedings. As a result, much of the courtroom dialogue is made up, as is the nature of the relationship between the two lawyers.

The movie takes other factual liberties:

—a court scene that opens the movie happened after, not before the Spell case.

—in the movie, Spell’s socialite employer claims she was raped twice; accounts from the time have her saying it was three times.

—Friedman was slender and athletic, not the heavyset character played by Josh Gad.

—Friedman’s daughter Lauren, who was also involved in the movie, said one thing the film doesn’t show was that the night of the verdict, her parents had left town because of death threats.

But more is accurate than not in the film, including even details about minor characters. “Some of the things you would think are not true were true,” Koskoff said, referencing a point in the movie where Friedman, in the courtroom, demonstrates being gagged.

Details moviegoers learn about Marshall’s life also are correct, including the fact that his first wife, Vivian “Buster” Marshall, suffered multiple miscarriages before her death from cancer in 1955. It wasn’t until his second marriage, to Cecilia Suyat, that he became a father. 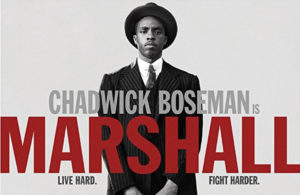 One of their two boys, John Marshall, reviewed multiple drafts of the movie’s script and helped the scriptwriters capture his dad. John Marshall said the film’s director, Reginald Hudlin, called him half a dozen times asking whether certain details were right, down to whether his father smoked. The filmmakers faithfully captured his father’s sense of humor, his confidence and his mastery of the law, John Marshall said.

University of Maryland law professor Larry Gibson, a Marshall biographer, agreed that the movie’s creators got how Marshall carried himself. “Life hung on him kind of loosely,” he said.

Susan Low Bloch, a Georgetown professor who clerked for Marshall at the Supreme Court, said the movie captured the personality, sense of humor and thoroughness of the Marshall she knew.

Moviegoers who linger in the theater through the credits will get to hear Marshall himself in a bit of old audio. He says in part: “You know, there are so many people, indeed my own sons at times, look at me with an expression on their face that they don’t believe what happened in the past.”