Jones said “(HBCUs) are part of the foundation of our higher education system in Alabama and around the country, and it is a top priority to make sure they have the tools and resources they need to continue their legacy of success. They are doing incredible work to prepare the next generation of leaders, particularly on the workforce development front.”

Today, Miles College boasts three new state-of-the-art buildings, with a combined cost of $20 million. They include a Welcome Center, a 208-bed dormitory and a student center featuring a cafeteria, game room and theater.

Such infrastructure investments are part of THE YARD, a strategy crucial to the long-term vitality of institutions of higher learning. Birmingham executive Erskine “Chuck” Faush approached French about his idea for THE YARD—a national initiative whose goal is to take HBCUs across the country from surviving to thriving. THE YARD pays homage to the central gathering spot on HBCU campuses.

Now, if you’re wondering why start with improvements that are central to student life versus, say, academics, there’s a reason. In fact, French had three other buildings in mind to enhance Miles’ campus until he talked to students.

“I sat down with the students and asked them what they needed to feel they are at home and comfortable, and what it would take to make a good atmosphere conducive to learning. And they told me,” said French.

And that’s just the beginning. The acquisition of 41 acres for North Campus, now under development, will more than double the size of Miles’ campus. 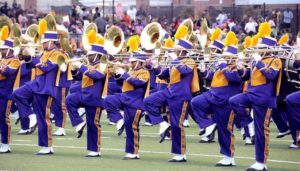 In THE YARD strategy, Classic athletic events can be leveraged holistically to raise awareness of academics and the three I’s—infrastructure, innovation and inclusion—on every campus yard.

“I’ve had the unique privilege of seeing the transformation of Miles College under Dr. French’s leadership. Miles is the model having success in each of the focus areas of infrastructure, innovation and inclusion,”said  Faush, founder of THE YARD

It makes sense, then, that while French is 100 percent focused on academics and student success, he has his sights set on a best-in-class athletics program.

In 2011, he took the first step toward that goal by hiring Reginald Ruffin—then a highly successful  defensive coordinator and linebacker coach at Tuskegee University—as head football coach at Miles College.

Before 2011, Miles College had never won an SIAC (Southern Intercollegiate Athletic Championship) title in football. When French began talking to Ruffin about coming aboard, he asked him straight, “How long will it take you to start winning?”

“He said, ‘Right away. We’re going to start winning the first year.’ I said, ‘That’s okay, coach. Just give me a reasonable time.’ But he insisted, ‘No, the first year.’ Then he said, ‘Let me show you how,’ recalled French.

Ruffin pulled out the roster books from Tuskegee and Miles. First he opened Miles’ book and showed French a list of student-athletes from Detroit, Chicago, California and New York. Then, he showed him the list for Tuskegee, a much more successful team. No one was from outside a 150-mile radius. The key to winning, Ruffin said, was keeping it local.

And he was right. When Ruffin became head football coach of the Golden Bears in 2011, Miles College brought home its first SIAC title that very year.

“Now we’ve won three SIAC football championships (2011, 2015 and 2018) because we focus on the local talent and what’s already around us,” French said.

That’s the recipe for Miles’ success in athletics. In 2018, Ruffin became athletics director, where he continues his duties as head football coach. Moreover, his “keep it local” approach to recruiting student-athletes has become Miles’ approach to student recruitment overall.

Along with championship-winning athletic teams, fundraising and infrastructure, French has ushered in an era of deliberate academic focus at Miles, with an emphasis on technology and innovation.

The college has increased the budget allocation for education and educational support services by 11 percent. Meanwhile, faculty have secured some of the largest grants in the college’s history.

Of course, all of this would be for naught without one final piece of the Miles College renaissance: student recruitment.

That brings us to the final component of the Miles College model.

“The yard, within our culture, is a significant and special place. It’s a gathering place and a place where academics are at the forefront,” French said. “There’s a social context when we talk about the yard that distinguishes higher education in a campus environment.”

Today, a pilot high school recruitment program led by THE YARD is unfolding at Miles.

Next, the students will write in a journal about their experiences. Finally, if they are ready to commit to Miles by the program’s end, a full scholarship will be on the table.

The goals are (1) keep top students close to home at their local HBCU to build their communities and (2) demonstrate the benefits of a physical campus versus online programs, which have become a big competitor for HBCUs over the last decade.

“Listen, we’re going to place you in the middle of the yard, and all around you will be the support systems that you need to survive,” said French, about the message Miles is sending to Birmingham area high school students, “and we will not speak to you simply from traditional trajectories of higher education, but we’ll include inclusion, innovation and technology and make sure that you don’t miss anything by not going the online route, that you grasp the full experience by being on the yard.”