There is no better time than now for a production of Ntozake Shange’s famed choreopoem and award-winning stage play, “For Colored Girls Who Have Considered Suicide/ When the Rainbow is Enuf”, according to Alicia Johnson-Williams, director.

Commonly known as “For Colored Girls,” the play will be staged at the Encore Theatre and Gallery March 1-3. The performance is a series of 20 separate poems choreographed to music that weaves interconnected stories of love, empowerment, struggle and loss into a complex representation of sisterhood. The cast typically consists of seven, nameless African-American women who are only identified by the colors they are assigned.

Johnson-Williams talked about the timeliness of the canonical play, which originally opened in the 1970’s by Shange, who died last year.

“We’re in the crust of the #MeToo movement and #TimesUp but the fact is, time was always up,” said Johnson-Williams. “This production speaks directly to women and how they’ve coped with these very issues that even today we still encounter and have to deal with as women and in particular as African American females in the United States of America.”

Johnson-Williams said “For Colored Girls” has always been an iconic production in African American theatre, particularly as it relates to women.

“The original production that Ntozake Shange mounted in the ’70s in San Francisco, was in a bar… but with this what we’ve aimed to do is add a different slant to it by adding some music and different elements to reengage audiences, particularly those who may have seen the show before.”

She said the film was good but theater is where you really hone in on your craft. “Live productions help you develop your talent and skills . . . it just gives you a different flavor when you see the live production. It’s more engaging and it’s in an intimate space and you feel more and engage even better and it just pulls on your heart strings even more than what it does in film.”

“When I got the call to be a part, it was a no brainer for me and it’s kind of been one of those things that I always wanted to do all of my time that I’ve been involved in theater and had an interest in acting,” said Frazier, who studied theater at Alabama State University, who added “it’s one of those coming of age type of performances and is one of the best things of your life to be a part of this particular production and phenomenal piece.”

Johnson, who has more than 25 years of theater experience and has directed “For Colored Girls” a number of times, said one central theme is always “you have to love yourself first. You have to connect with a higher power to be all that you can be and know that you can overcome anything no matter what it looks like. It’s a very spiritual piece in nature,” she said “…it speaks to so many things, pretty much everything that you can think of that a woman might experience at some point is in this play. Overcoming those obstacles to . . . be all that you can be is what resonates every single time.”

Encore Theatre and Gallery is a new theatre company in Center Point dedicated to producing works for minority performers.

Marc Raby, producer of “For Colored Girls” and creative director of Encore, said, “I’m convinced that we can create greatness right here at home . . . so we made a decision to open a space, we’re just an addition to the entertainment scene, arts scene and the cultural scene in our city.”

Four performances of “For Colored Girls” including Friday, March 1, evening show at 7 p.m.; two Saturday, March 2, showings at 2 p.m. and 7 p.m. and a Sunday, March 3, evening show at 5:30 p.m. There will also be a talk back event after the Saturday afternoon show with local radio host Tasha Simone from Hot 107.7. Tickets $15-$35 and can be found on Eventbrite. 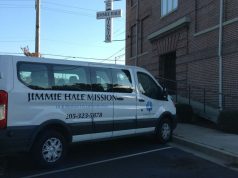