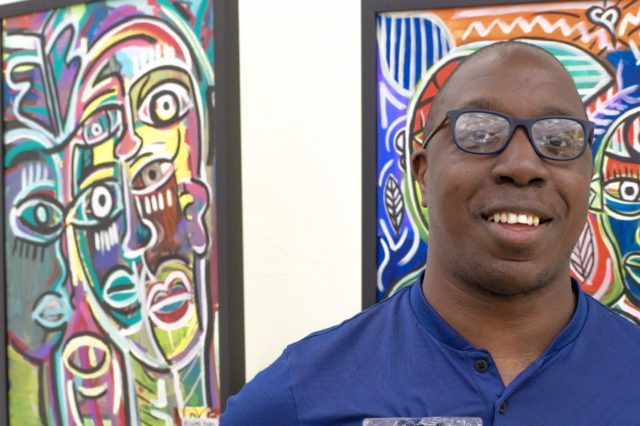 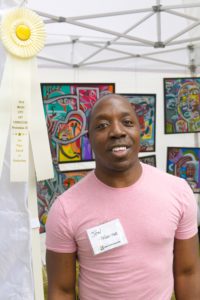 Five and a half years ago, Jon Osborne was living in his car and working at a Birmingham, Ala.-area law firm.

One day a co-worker followed Osborne “home” and learned that Osborne’s “home was the third parking spot on the left side of [downtown Birmingham’s] Linn Park facing the Boutwell [Auditorium].”

The coworker—who Osborne said, “is my best friend to this day”—took Osborne to dinner, got him to confess, gave him $500, and set him up in a hotel room for a couple of days until Osborne found a roommate via an online classified-advertisement site.

“[I] became ‘The Homeless,’ and my mind-set changed,” Osborne said. “[Everything] was taken away from me, so I was able to be on another level and get a chance to say, ‘I was looking at the world in a whole different way.’ It kind of humbled me in a sense. It’s crazy that five and a half years ago I was homeless, sleeping in my car, and five years later I’m about to be in an art festival at the park [where I was living]. I have something to celebrate.”

Osborne, a self-taught contemporary artist who works mainly in acrylics, was one of 200 juried fine artists from Alabama and across the U.S. who gathered in Linn Park to showcase a broad range of mediums and styles last month during the Magic City Art Connection (MCAC), Birmingham’s largest city center arts festival. And he received an Award of Distinction.

Known by his moniker “Jon of Art” and recognized for the work he often shares on social media, 34-year-old Davenport, Ala., native Osborne said things are beginning to change: “People are starting to see me because I’m coming out more,” he said.

Osborne said he looked forward to last month’s MCAC, where he presented 50 pieces, some old and some new, several of which he painted over a period of three weeks. The new work has more of a “free” feel to it, he said.

“It’s where I am in my life. Something happened to me recently, [and] I’ve been fortunate to be around a lot of inspirational and creative people in Birmingham that are from different states.”

Osborne lost his mother in 2009 and his father in 2012. Shortly after the death of his father, Osborne was put out of his living quarters, the result of a bad relationship.

“I didn’t have any friends or family [in Birmingham, and] I didn’t want to bother my sisters; they were already stressed [because] we were [paying] for the burial out of pocket,” he said. “It was difficult for me, but I didn’t want to put anymore burden on them.”

As an artist, being homeless helped Osborne see the world from a different perspective.

“I use a lot of color because when I was homeless it was very dark … part of my life, so I use a lot of color to emphasize that,” he said. “There’s enough negativity … in the world, but a lot of life is going on … [that’s] never magnified or given recognition.”

The generosity of the coworker who gave Osborne $500 was a turning point for the artist, who often draws on his life’s experiences to influence his work. In addition to creating works about his former homelessness, Osborne gets inspiration from his childhood and his parents; his mom died from kidney failure and his dad from a massive heart attack. Still, Osborne said he often reflects on their lives and senses their presence.

Part of Osborne’s art shines a light on some of the passions his parents never got a chance to pursue.

“My mom loved to sing. I don’t know if she probably wanted to be a singer. … My dad [had] different talents, too, but he worked to provide for his family, … to make sure we were good,” he said. “[My parents] gave a lot up, and I appreciate that.”

Even though his parents have passed away, Osborne feels he still he shares a space with them because “when I’m painting I can hear some of the memories and some of the things they used to say when I was growing up, so I use some of those words in my 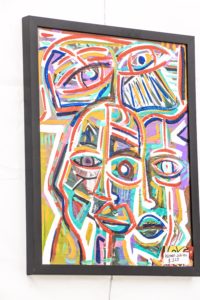 “I’m trying to give people an idea of how we need each other,” he said. “The theme behind my work is interconnectivity and the art of the human experience because we have so many different cultures and are afraid to mix them together. I’m mixing them together so you can see the beauty. … It’s a way [to show people] that we need to be more open with accepting people the way they are.”

Being born and raised in Alabama, Osborne has noticed how artists he has befriended from different states are catching on to life in the state.

“It’s kind of difficult sometimes to be a creative in Birmingham—especially a black, gay, Buddhist artist,” he said. “It’s not about that, it’s [about] my art.”

Osborne, who holds an associate degree in graphic communications from Montgomery, Ala.’s, Trenholm State Community College, said he recently started to trust his creative process and who he is as an artist: “It’s freedom,” which he expresses through art, he said.

“A lot of people say they love the freedom in my art because it’s different than [the norm] around here.”

Though Osborne sells his artwork online and showcases it on Instagram, he feels events like the MCAC give people a chance to “see my work … up close and personal, [and they] get a chance to meet the artist.”

Social media doesn’t “give the entire sense of my work.” Osborne said.

Meeting in person helps him connect with people, tell part of his story, and share his message: “My message is [about] being your authentic self, knowing who you truly are, … [and] finding that out [along] your journey.”

As an artist, Osborne is influenced by music, people, and nature, so his pieces feature patterns of leaves and birds, as well as hidden faces, “which [represent someone’s] persona or ego,” he said, adding that the leaves and birds can stand for freedom or memories.”

“For instance, we grasp memories or things all the time but don’t realize [that] over time that leaf is going to leave the tree. [My pieces often include] symbolic stuff like that.”

Another part of Osborne’s creative process involves “aimlessly wandering,” or just walking with no particular destination in mind.

“Basically, I walk down streets, go on nature walks, … [stroll through] parks, where I look around and get energy from people,” he said.

“Most of my work is really intricate, more detailed, more colorful,” said Osborne, who started off doing abstract work, which he still often incorporates into his current African- and Asian-culture-inspired work.

“It’s just something I love to do,” he said. “There’s something about how the styles are different but so beautiful together.”’