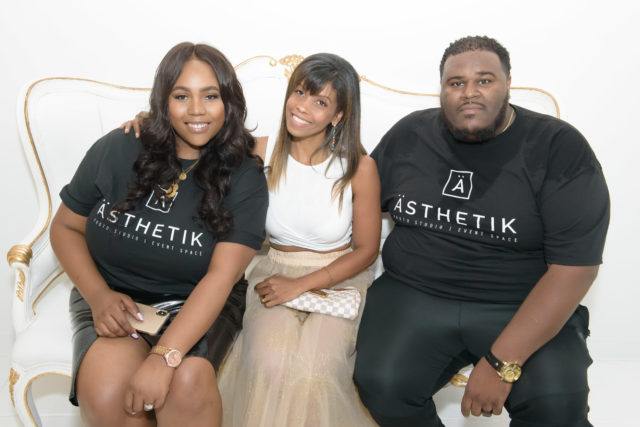 Asthetik, a new creative studio on the north side of Birmingham’s downtown district, held its grand opening on June 29 and drew more than 125 attendees, many of whom were creatives and millennials.

The 1,700 square-foot studio, located at 212 24th St N., is a modern flex space that houses a photo studio, exposed brick, floor-to-ceiling windows, and 16-foot ceilings, is owned by Dontez and Jamie Heard.

“Asthetik will fill a void that Birmingham’s had for a while now, in the creative industry,” Dontez said. “I think that people will be able to come and connect, collaborate, network and also work and create content.”

He added that the new space will accommodate projects and productions of all sizes.

“I think it’s a space that can fit many different needs, from photography to graphic design to creation, we offer a space that people need to come and work and to create,” said Dontez.

Asked how he and his wife came up with the concept for Asthetik, he said, “We actually kind of grew into the concept.”

“My wife and I are originally a photographer and a wardrobe stylist and we actually started with a home studio and one thing led to another, people started to book it, and because of [the versatility of] the space, not just for photo shoots but for events and all, so we said ‘let’s take it to the next level’, and we came up with Aesthetik.”

Dontez said Asthetik is the ultimate creative space, “it transforms every day,” he said. “Whatever you need from birthday parties to corporate events and shooting concepts, it’s [Asthetik] a complete blank canvas, you can make it whatever you want.”

Dontez, better known as ‘Tez Davenport’ of The Davenport Design, is a seasoned photographer and graphic design artist whose agency specializes in personal and professional brand development.

Jamie, a wardrobe stylist who runs her own website, Jamiebstylist.com, said, “I just pray that every person that comes through this door doesn’t leave out the same. I hope people are able to come in and create beautiful memories in this place and [we are] able to help with their business and vision in some sort of way.”

Asked how Asthetik fits in with the ongoing downtown revitalization efforts, she said, “This space is a little different, what we’re really trying to do here is cater to creatives. What was missing downtown was a space for creatives to come in.”

“So whether it’s a photographer or a graphic designer, or an online boutique owner that wants to come in and host a pop-up shop and have a space that has the esthetics that they’re looking for, they can,” she said.

She said the prep kitchen makes it the perfect space for “networking events, workshops, anything can be created in this space . . . you can really be imaginative.”

Dontez credited collaborations with Create Birmingham and REV Birmingham as keys to helping with the business.

“Those partnerships really made the difference with us being able to make it happen so quickly, and also the location [where] we have it,” he said. “The people over at Create Birmingham helped us put the idea together, and the people at REV Birmingham helped us find the space and get us in a centrally located spot in the entertainment district, where it’s live and energetic with a good bit of foot traffic and where people want to be,” he said. ‘It’s a good creative environment.”

“This is something that we need, all creatives,” Austin said. “[Dontez] is creating an atmosphere that provides something that we’ve been lacking and a lot of . . . photographers, we’ve all kind of thought of doing something like this, but to see them actually do it is great.”

“Creating an atmosphere where you can have a photography studio and an event space at the same time is a plus,” said Austin.

Derek Deandre, co-founder of Birmingham bred fashion line, Splashed by DKG, said that he is no longer formally associated with the brand but in the process of building his new fashion line ‘Love and Oscar’ and expanding his creative portfolio in Atlanta, Ga, and has already thought of a way to utilize the space at Asthetik.

“I’m actually doing an event here in December, it’s going to be an installation type set-up” he said. “I’m going to have some displays of my graphic design, fashion design and my photography…I’m going to merge all of my passions into one event, and I think that’s something that this space offers to creatives– a truly blank versatile space– where they can come in and just pour their ideas out.

Evelyn Ufomadu, entertainment attorney and a former fashion blogger said that Asthetik will become a primary resource for creatives.

Well-decorated spaces are hard to come by, which is important for producing new material, she said.