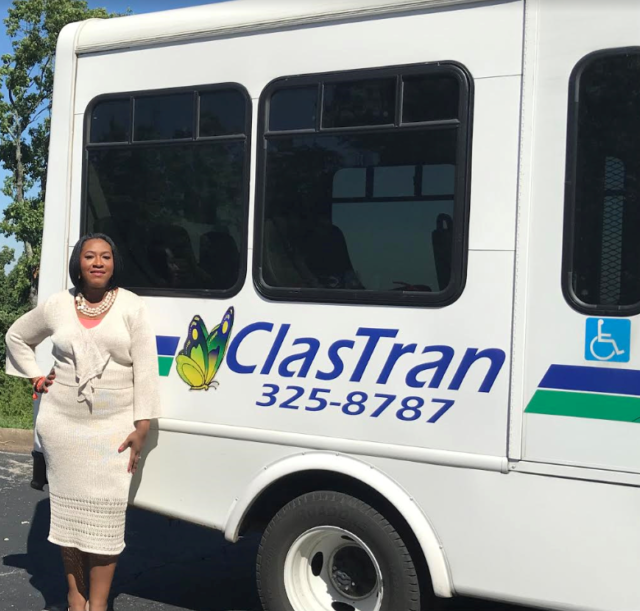 The nonprofit ClasTran coordinates specialized transportation, also known as paratransit, services in Jefferson, Shelby, and Walker counties. It provides subsidized rides for people who are 60 and older and eligible for paratransit under the American with Disabilities Act. ClasTran also provides unsubsidized rides for people who do not meet the criteria mentioned but travel on a space-available basis and pay full fare.

“The service we offer actually allows people to live,” said Bacarra Mauldin, executive director of ClasTran. “There are people who literally wouldn’t be able to live if it were not for our service: dialysis patients, chemotherapy patients, people with disabilities who need to be active and independent to keep their mental health in the right space. We allow people to live, and we need more advocates in this space. That’s why I believe the work we’re doing is really, really important.”

In March, Mauldin made history when she became the first African American woman to become permanent executive director of ClasTran.

“March was Women’s History Month, so I felt like I made a little history of my own when it happened,” she said. “I was excited about that, but more so …. [I was focused on the many] people who depend on our services. That weighs heavy on me every morning when I wake up and every night when I go to bed. I ask myself, ‘How can we make it possible to meet the needs of the hundreds of thousands of people that reach out to us every day wanting a ride?’”

Mauldin served as ClasTran’s interim director beginning in October 2018, during what she called “interesting times” for the organization.

“When I came in, one of my charges was to set a course to make ClasTran relevant today and tomorrow; to make us financially sustainable today, as well as put in place a plan for sustainability in the future. Our team has worked every day to do that.”

Under Mauldin’s leadership the agency is heading in the right direction.

“It is our goal to disrupt what anyone thinks or may have thought about what public transportation should be in the greater Birmingham region. We’re going to lead the way in showing them what it is supposed to look like through innovation and by offering new mobility management,” she said—and she’s not shy about the possibility of ruffling some feathers while doing it.

“I know disruptor can sometimes have a sort of negative connotation, but we need a disruptor in this case,” Mauldin said.

“We need to talk about why what we do matters. We need to disrupt what people may think about public transportation. People think it’s a poor folk’s movement, but it’s not. It connects people to opportunities.”