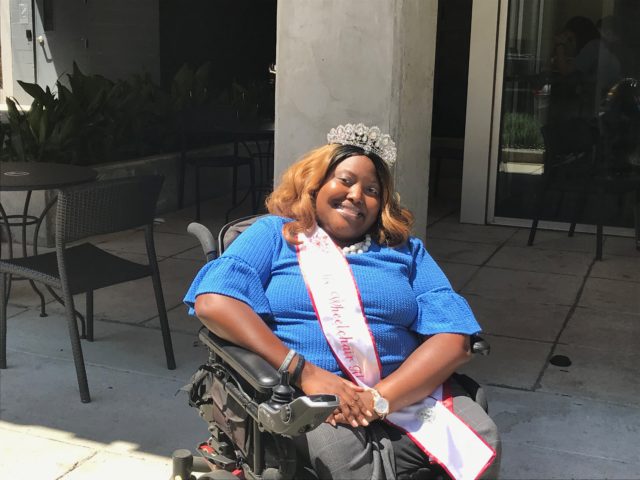 Taria Jackson is adamant about two things: Don’t treat her any differently than you would anyone else and equality for all.

“I tell people all of the time, ‘just because I cannot walk, doesn’t mean there is something wrong with me mentally’ I have just as much knowledge as the next person,” said Jackson. “I don’t like when people give me that special treatment, give me the same treatment you would give someone else. I am very independent. I can do everything anyone else can do, I just cannot walk.

“From the time I wake up until the time I go to bed, it is all me and I do it with help from my higher power, my God and that’s all I want people to know is to just treat me as if the wheelchair was never there. Treat me as you would with any other person, with the same dignity, respect and compassion. That’s all people with disabilities want.”

“Being 1st runner up means that I really worked hard and that title is worth having,” Jackson said. “I gave it my all and I will forever be a winner . . . I got to meet women from different states and I was able to learn and grow. Things that I’ve learn I’m able to bring back to Alabama to continue to advocate and educate for individuals with disabilities.”

Jackson said she wants to make sure that all people with disabilities are treated equally.

“Whether that is a physical disability or a mental disability because there are people who have disabilities that are not visible to the eye, so I want to make sure that all people are receiving equal opportunities from employment to education,” she said. “I want to make sure that we have a voice and that we are heard and that when we come into the room, we also have a say so in the matter . . . not put us in the background and think it won’t affect us because it will, whatever the situation may be . . . treat us as if we didn’t have a disability at all. That’s all we really want.”

Jackson grew up in Birmingham in the Pratt City and Ensley communities. She was born with a condition called spina bifida, which is a birth defect that occurs when the spine and spinal cord don’t form properly

“For me, I’m paralyzed from the waist down, but it can affect people in different ways,” said Jackson.

“From elementary to middle school, I was on the praise dance team, I was a cheerleader and I also was a soccer player for the Lakeshore Foundation,” she said. “At EPIC, it was a really good time for me. I started out in special education classes and it was no real reason I was in there except for my physical appearance.

“One day, I was in class and I read something on the board and my teacher did not know that I could read and I don’t know how it happened, but I just remember my first grade teacher walking me to another teacher’s class and that’s how I transitioned from special education to mainstream classes.”

Jackson recalled that transition as a milestone.

“A lot of my friends that I started special education with [never left those classes] for whatever reason and that’s why it’s so important to have others advocate for you” said Jackson.

With the support of advocates she skipped eighth grade at A.G. Gaston and went straight to the ninth, Jackson said.

“Everybody was worried about me [skipping a grade] but it didn’t feel any different to me because I’m a people person and I got along with everyone and when I was a freshman, I was hanging with upperclassmen, so it wasn’t a big deal to me and I was fine,” she said.

Jackson graduated from Parker in 2009 and attended Lawson State Community College for two years and then the University of Alabama in Tuscaloosa in 2011. While at UA, she was in the pre-law club, the chess club and the psychology club.

“I graduated with my degree in psychology in 2014 and I took a year off and I was a substitute teacher for Birmingham City Schools during that time, which was not for me so I decided to go back to school to pursue my master’s degree in social work,” said Jackson.

After graduating with her master’s degree in 2017, Jackson began as a social worker which lasted until January of this year when she lost her job.

“I plan to go to UAB in the fall and I’m trying to pursue another master’s degree to become a nurse practitioner or a physician assistant because my end goal is to work with cancer patients,” said Jackson.

Jackson decided to compete in the Miss Wheelchair Alabama pageant after hearing from people who urged her to become a contestant.

“The first person who told me about it, sent me an email and I didn’t think anything of it. The second person who told me, I didn’t know her from a can of paint but she reached out to me on Facebook . . . I feel like when you hear something more than once, it’s a sign,” she said.

Jackson said she paid attention to what she was hearing and became obedient. “At that time, I was going through some trials and tribulations and it got to the point where I didn’t want to do it and I talked to the coordinator of the organization and she’s a very spiritual person and she pretty much told me, ‘I need you to do this.’”

The pageant coordinator, Joann Pearson, inspired her to complete the application, Jackson said.

After she completed the application, Jackson said she learned that someone had already sponsored her. The pageant was in Huntsville in March and consisted of workshops and interviews.

“I had my interviews and the tricky part was they didn’t let any of us know who the judges were, so I was talking to judges the whole weekend and didn’t even know it,” she said.

On the night of the pageant, Jackson and the other contestants had to answer another series of questions. Jackson took home the crown.

“When I heard I had won, I kind of blacked out . . . I was just so happy because I had never done any pageant competition in my life… so this was the first time I won something as an individual in my lifetime,” she said.

“I have to do like two appearances a month whether it’s at a hospital or speaking to children at school but it’s really about keeping up my platform and what my vision is with my platform,” she said. “I have spoken to third graders through an after school program called Girls Talk, I have spoken at a graduation for Alabama Vocational Rehabilitation… I also got to speak in front of the mayor and the Birmingham City Council during one of the council meetings.”

Last week at the invitation of Commissioner Sheila Tyson she spoke before the Jefferson County Commission.

Jackson speaks from the heart.

“I know what it feels like to be discriminated against and to not feel accepted and to be rejected based off a physical appearance alone,” she said. “We do not look like what society says we should look like and I just know what it feels like to be the odd one out and it’s not a good feeling. Having any type of disability can take a mental toll on someone as well especially since I know people who were walking one day and in a wheelchair the next.”

Jackson said she knows what it’s like to be in the wheelchair and someone who doesn’t know what it feels like “they’re not going to be as passionate and advocate as much as they need to because it’s not truly a problem for them . . . I just want to make sure that the next person or the next generation has it a little bit easier than I had,” she said.

Speaking of advocates, Jackson said her mother, Dorsann Jackson, has been her biggest supporter.

“She has been there with me through it all. She saw things in my life long before I saw things,” said Taria. “She had a vision for me and at the time I couldn’t see it but she would go to bed and wake up and she’ll say, ‘I had a dream of you speaking in front of thousands of people’ and I would say ‘good luck with that’ but just seeing how her dreams are starting to slowly manifest in my life is amazing.

“It’s so important to have someone in your life to see the fire in you because you’re not going to always be able to see it in yourself so I am very fortunate to have a mom who sees me the same way God sees me.”