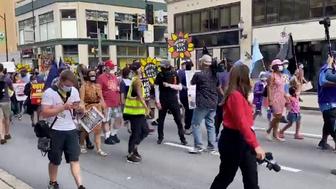 Workers across the country walked off the job on Monday to protest racial inequality as part of an organized action dubbed “Strike For Black Lives.”

More than 50 labor unions and workers’ rights groups, including the Service Employees International Union, the American Federation of Teachers and the Working Families Party, banded together to organize the strike.

Strikes were planned in more than 25 cities, including Detroit, Los Angeles, Minneapolis and New York. In Ferguson, Missouri, demonstrators planned to gather at a McDonald’s and march to a memorial for Michael Brown, a Black teenager killed by police in 2014.

Photos and videos posted to social media on Monday showed nurses and other essential workers marching through the streets. Other people who have continued to work during the coronavirus pandemic ― sanitation workers, delivery people, fast-food workers and more ― also were expected to strike.

As part of the action, participants took a knee, held a moment of silence, or walked off the job for 8 minutes and 46 seconds beginning at noon in memory of George Floyd, whose death in May sparked massive anti-racism protests across the country.

Prosecutors initially said a Minneapolis police officer knelt on Floyd’s neck for 8 minutes and 46 seconds, though that time estimate was later reduced by one minute. The exact amount of time remains unclear, The New York Times reported last month.

Among the demands, strikers are calling for corporations to take immediate action to dismantle racism and for every worker in the U.S. to be given the opportunity to form a labor union.

“We cannot achieve economic justice without racial justice,” SEIU President Mary Kay Henry said in a statement. “From our nation’s founding, white supremacy and economic exploitation have been inextricably linked.”

“Today, in this national moment of reckoning, working people are demanding fundamental changes to America’s broken system,” Henry continued. “They’re coming together in the Strike for Black Lives to declare that until Black people can thrive, none of our communities can thrive.”