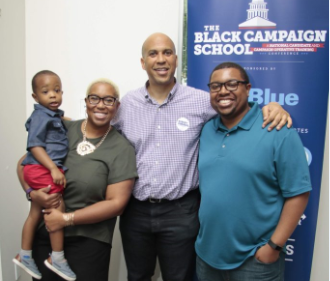 The growing Collective PAC is turning its attention and growth strategy to get more black politicians elected at the local, state, and federal level during the 2020 election.

The upstart group, founded by husband-and-wife team Quentin and Stefanie Brown James, made headlines during the November midterm elections by spending nearly $2 million on TV ads to boost the black voter turnout in Florida. That effort assisted Andrew Gillum in his crusade to become the state’s first black governor.  “That was significant because it was the most money that a black-led organization has given during a primary election,” Stefanie Brown says. All told, the Collective raised an impressive $6.5 million to support black candidates during the 2018 election.

The PAC also launched a historic texting program that reached over two million black registered voters during the 2018 election with many respondents committing to vote. The program was part of an effort to convince black voters, including tech-savvy millennials, to vote and bring peers to the polls. The text program helped the Collective encourage black voters in seven states to vote.

Now, the Washington, D.C.-based Collective PAC contends with the elections stolen from Gillum and Georgia Gubernatorial Candidate Stacy Abrams, the group’s entrepreneurial efforts are needed more than ever to help black candidates win races unquestionably. The PAC hopes to raise $12 million by 2020, more than doubling its 2018 fundraising efforts.

Quentin and Stephanie Brown James shared with BLACK ENTERPRISE innovative ways their PAC plans to provide resources and financial backing to help black candidates run competitive and successful campaigns in all areas of the country.

BE: What activities and campaigns will your PAC launch in 2019?

Stephanie Brown: Collective will be hyper-focused on preparing black candidates and black campaign operatives to run and win successful political campaigns next year through our Black Campaign School initiative.

For the first time, we’ll be hosting six regional Black Campaign Schools and one national BCS conference that we’ve hosted for the past two years. We plan to train 2,000 black candidates and staffers through BCS’s in Cleveland, Houston, Las Vegas, Boston, Washington, D.C., and Columbia, South Carolina. We want to eliminate the narrative that there are no qualified black candidates and staffers to serve in senior-level campaigns, especially during presidential elections.

BE: How does the Collective PAC plan to engage progressives, the Democratic Party, and black voters differently than other organizations?

Quentin Brown: The Collective is the nation’s PAC focused solely on training, funding, and supporting black candidates. To this end, we are continuing to build a national network of donors of all ages and backgrounds who understand the importance of funding black candidates at levels that will help them win.

BE: What innovative methods and outreach will your PAC apply into 2020?

Stephanie Brown: [We] will continue to use technology and other methods – including mobile texting, branding merchandise and fundraising — that involve black folks in the political process.

Specifically, the Browns say the strategy will include:

-Implementing a culturally-specific training operation for black candidates and operatives

-Hosting black donor cultivation events in cities across the country

-Engaging with the black tech, entertainment, and creative communities to spur their investment in the work, introduce them to candidates they should support, and show them a path to increase their involvement in politics.