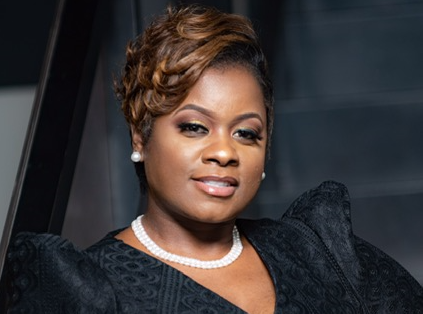 At age 16, Myra Armstead experienced a tragic event that would change the course of her life. Her best friend, her father, Myron Williams, was murdered.

“I never thought I would witness anything of that magnitude,” she said. “I feel slighted because there are so many things in my life that he missed out on. He was a person that liked to have fun. He loved music and entertaining others. … He was a caregiver.”

The loss inspired Armstead, 42, to seek justice for and to help others.

“That’s how I ended up going to law school,” Armstead said. “Not only did I endure [his murder], but [I wondered] how many other people endured that, as well, or are currently enduring that type of situation.”

Armstead is a 2018 graduate of Miles Law School and founder of the Trunk Ministry, a nonprofit organization through which she presents strangers with clothes and shoes. She published her first book, “Divine Purpose,” last year to share the trials and tribulations she has faced.

“Even if you hadn’t had a past filled with hardship or struggle, I still think it is good to help others and to give back,” she said. “There’s no excuse why any one person can’t give back, even if it’s just mentoring another person. I feel like my calling is to inspire and motivate and have an impact on people. I don’t want to just exist and not be a person of impact or of change.”

The book includes a passage about her daughter Myah’s car accident in 2016.

“She was temporarily disabled for some months and couldn’t walk,” Armstead said. “It was after that traumatic experience that I decided to go ahead [and write my book]. I felt like God kept allowing a chain of events to happen in my life because I chose to not to be obedient and put the book out. Once I finally did, everything has just shifted and opened so many doors for me. … To be effective with the book, I knew I needed to be transparent and honest. [I knew I needed to] truly embrace my brokenness and stand on it. Once I released the book, I feel like it set me free.”

Armstead and her three siblings — two older and one younger — were raised by a single mother.

“People gave us used clothing, shoes, whatever they could to help my mom,” the Bessemer native recalled. “As I became older and started to do more and the better things got for me, the more God kept blessing me, so I was just like, ‘How can I help others?’ It started out as my own little outreach to help women.”

She added, “My siblings and I had different fathers, so that caused a lot of struggle [when I was] coming up. It also created a hunger in me for success and a desire to want to help people because I saw [my mother, Maggie] work so hard to try to provide for us.”

Armstead was also close to her father, who was murdered in 1994 by someone he knew.

“The person that murdered my father was never arrested,” she said. “I felt as if I was a victim, as well, because nothing came out of it. My father had a daughter before me, but someone raped and killed her before I was born.”

“I went through a period of depression after losing my father and left school,” she said. “Shortly thereafter, I had my first daughter. At that point, my whole direction of life changed because my priorities shifted. School went on the back burner, and my focus was more on taking care of my daughter and trying to provide the best I could for her. By the time I turned 21, I was in a full-blown family situation because my daughter’s father and I got married.”

With a new baby and family, Armstead began working with the city of Bessemer through its summer youth program as an office aide in the mayor’s office.

“I worked there and, honestly, they groomed me because I didn’t have any sense of professionalism or business,” she said. “I worked in Mayor [Quitman] Mitchell’s office assisting his administrative assistant. … From that point, I worked [as an executive administrative assistant] for the Bessemer City Council and [worked] 13 or 14 years with the city of Bessemer.”

Eventually, Armstead had a second daughter, Marlanda, in 2000. When her girls were older, she returned to LSCC, enrolling in the school’s pre-law program. After completing her credits at Lawson, she attended Faulkner University, where she earned a bachelor’s degree in criminal justice in 2011. She then earned two master’s degrees online from Columbia Southern University, one in criminal justice in 2014 and the other in public administration in 2016. While working on her second master’s degree, she enrolled in Miles Law School in 2015.

Throughout it all — being a full-time mother, college student, and city of Bessemer employee — Armstead never forgot those in need. In 2012, she started her Trunk Ministry, which provides clothing and other items to women in need.

“I didn’t want to give anyone anything I wouldn’t wear myself, so I started to get the best of things out of my own personal belongings and share them with others,” she said. “I often encounter different people, and when you encounter people, you can tell when there is a need. I may just say to them, ‘Hey, walk to my car with me. I think I might have something for you.’ It is a true gift from God to be in a position to bless people in that way.”

Armstead’s nonprofit grew with the help of others, she said. “People started donating a lot of clothes, shoes and purses, and I started doing giveaways at the YWCA and shelters.”

She still does a lot of the drop-offs by herself because she likes the personal touch and being able to come into contact with women.

“I don’t want to get too far away from that, which is why I’ve been restrictive with letting too many people in,” she said. “I may have my daughters help me here and there, but I don’t want to lose the personal touch of being able to witness and minister to other women.”

Due to the COVID-19 pandemic, Armstead and her daughters — Myah, 22, and Marlanda, 19 — have put their Trunk Ministry work on hold because they have been unable to receive items from people who want to donate.

“Hopefully, [donations] will increase afterward because people, being stationary in their homes, are cleaning and revamping their closets,” Armstead said.

To purchase Myra Armstead’s book, “Divine Purpose,” or donate to the Trunk Ministry, email myradeunique@gmail.com or www.myradeunique.com; you can also contact her via Facebook or Instagram at MyraDeUnique.